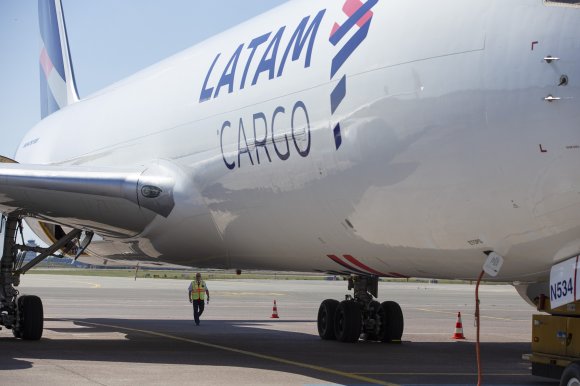 South America’s LATAM Group has increased freighter frequencies to Europe and the US to mitigate the reduction of belly supply capacity caused by its passenger aircraft being grounded amid the COVID-19 crisis.

The Chile-based company said it will maximize the use of its entire cargo fleet, which comprises 10 Boeing 767-300Fs and four 777Fs.

LATAM Cargo announced the adjustments between South America and Europe, adding a seventh weekly frequency to Amsterdam (AMS) and another return from Frankfurt (FRA), totaling a 40% increase in its offerings compared to before the pandemic.

“To support all supply chains, and very specifically those dealing with aid and relief, we are focusing on adding more capacity on critical routes.”

AMS is now positioned as the main point of entry to the European continent for LATAM Cargo.

Exporters from Latin America use LATAM Cargo to transport perishables including products coming from Brazil, Chile, Guatemala and Peru. The route is available to all interested exporters. The return flight from FRA will transport medical equipment and supplies, electronics, auto parts, general cargo and other types of shipments.

LATAM Cargo has also diversified its point of entry to South America by incorporating Sao Paolo Guarulhos airport (GRU), Brazil for three of its weekly frequencies from Europe.

The airline has also implemented adjustments between North and South America, and recently reported a 15% increase in its frequencies from Miami (MIA) to South America, going from 23X-weekly to 26X-weekly. It also incorporated connecting freighter flights in GRU.

The carrier recently added new cargo services from Los Angeles (LAX) and Mexico City (MEX) to and from South America.