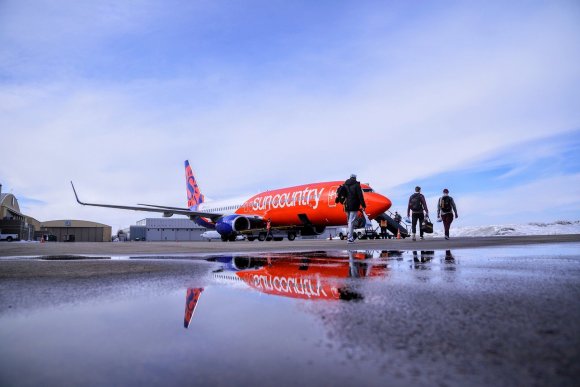 The US Department of Transportation (DOT) granted Sun Country Airlines permission to cease flying to a large portion of its domestic network while denying a similar request from Frontier Airlines.

Minneapolis-based ULCC Sun Country received approval to suspend service to 15 domestic markets until June 21, and to delay beginning seasonal flights to an additional six points until the same date.

In its decision to waive the requirement for nearly two dozen Sun Country destinations, the DOT reasoned that smaller carriers should be granted relief from “serving large hubs or focus city airports that have abundant service by large operators using the airports in question to provide connecting services.”

Frontier Airlines, the Denver-based ULCC, was far less successful in its bid for relief, receiving permission to cease flying to just three of the 30-plus markets it had hoped to exit for the time being: Boston, Charlotte and Detroit.

The difference in the DOT’s treatment of Sun Country and Frontier boils down to the differing nature of their networks; the former operates leisure routes to primarily large-hub destinations, while the latter mainly sought relief from smaller points that major carriers often do not serve.

“The relief we are granting is limited in scope to service to large hubs that have abundant service by large operators using the airports in question to provide connecting services,” the department stated in both orders.

More specifically, the DOT said it will grant relief for carriers with less than 10% of total domestic capacity from operating to large hub airports, defined as those with 1% or more annual passenger boardings.

The updated guidance signals an inconsistency with a previous round of decisions, however, portending a series of appeals from carriers like Spirit Airlines and JetBlue Airways, both of which fit the DOT’s definition of a small carrier but were denied requests to pull out of large hubs.

South Florida-based Spirit, for example, was barred from suspending routes to major hubs like Charlotte, Minneapolis and New York, while New York-based JetBlue was denied a bid to halt operations to Dallas, Houston and Minneapolis.