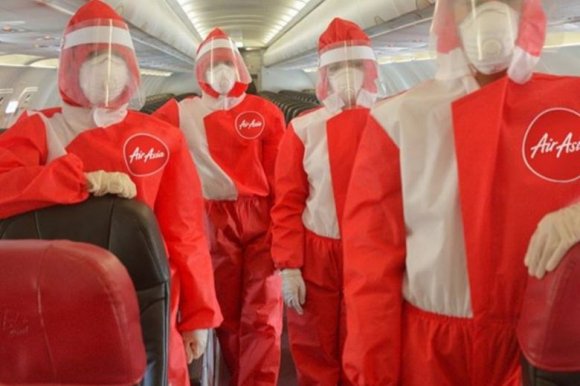 AirAsia is trialing a personal protective equipment (PPE) uniform for its cabin crew as the LCC group prepares for the resumption of flights in some markets.

The red and white PPE suits were designed by Filipino fashion designer Puey Quinones and was first used on an AirAsia Philippines recovery flight from Bangkok to Manila. AirAsia said the suit is under further assessment and a review of the design is underway.

AirAsia's Thai AOC will start domestic operations from May 1. The carrier has implemented a series of regulations for its passengers, such as the wearing of masks throughout the journey and limiting them to only a single piece of hand luggage that must be placed under the seat in front of them. The airline said this is to ensure social distancing in the cabin as passengers get on and off the aircraft. Up to 7kg of additional baggage can be checked into the hold at no additional cost while the measures are in place.

A limited number of seats will be available for each flight as passengers will be distanced with alternate seating. Food and beverage service will also be suspended.

In the first quarter, the group said its 80% load factors exceeded its own expectation of 77%, which the LCC credited to proactive capacity management, especially in Malaysia and Thailand. Both markets saw capacity—measured as available seat kilometers (ASK)—slashed by 24% and 30% year-over-year (YOY) respectively.

In India and Japan community lockdown measures were not imposed until April and these were the only two markets that saw positive gains. AirAsia India saw its passenger carriage increase 30% to 2.5 million passengers. Capacity almost increased by half—by 45% YOY—with the introduction of 10 A320s and revenue passenger kilometers (RPK) also were up 32% YOY.

Fleet size remained the same in Japan with three A320, though capacity and demand both improved 30% and 15% YOY respectively, resulting in a 32% increase in passenger carriage.