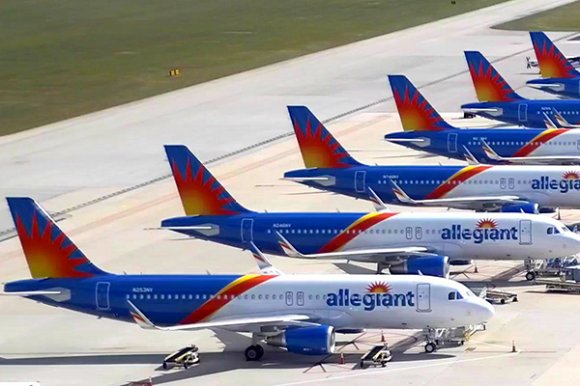 Allegiant Air has received permission from the US Transportation Department (DOT) to reduce service at a host of domestic airports below minimum levels outlined in the CARES Act coronavirus stimulus law.

The decision means the Las Vegas-based ULCC can shrink its schedule at 10 mostly mid-sized airports to just one weekly flight, down from the 3x-weekly required previously.

The waiver applies at BLI and MFE until June 30, extending until Sept. 30 for the other eight points. Operations to San Juan, Puerto Rico (SJU), which the carrier had planned to terminate prior to the onset of the COVID-19 pandemic, will be allowed to end as previously planned.

In reducing Allegiant’s service obligation, the DOT judged that its highly-variable business model—in which it sometimes serves points less than weekly or even less than monthly depending on demand—means that the 3x-weekly minimums required by the CARES Act would not be “reasonable or practicable.”

Allegiant’s network focuses entirely on point-to-point services, mainly from underserved smaller and mid-size markets to popular leisure destinations. The carrier does not transport connecting traffic or cargo, and only operates Airbus A320-family aircraft, limiting its ability to gauge aircraft up or down to realign capacity with lower demand.

In a supplement to its waiver application, Allegiant warned the CARES Act would force it to operate 290 more round-trip flights through Sept. 30 than previously planned for under its existing schedule. The additional flights would have an average of 4.8 block hours each, costing an additional $4.7 million to operate.

Allegiant currently needs to hold onto as much cash as possible. In an April 29 regulatory filing, the travel company warned that future liquidity could be “severely impacted” by the coronavirus, noting that existing debt agreements and a weakened credit rating may “negatively affect our ability to seek additional sources of liquidity on favorable terms, if at all.”

The DOT’s decision to grant what it described as “narrow and tailored” relief to carriers like Allegiant and Minneapolis-based Sun Country Airlines, while denying other waiver requests from JetBlue Airways and Spirit Airlines, shows the department is evaluating requests on a case-by-case basis, exercising its discretion to consider the unique needs of different airlines.

Both JetBlue and Spirit have submitted additional requests for relief after their initial applications were mostly rejected, arguing that modified criteria for small carriers in the most recent round of decisions is inconsistent with their own treatment by the department. New York-based JetBlue wants to temporarily exit 16 large hub markets, while Spirit is looking to pull out of six.