British Airways could pull out of London Gatwick Airport (LGW) as part of plans to downsize operations once the COVID-19 pandemic subsides.

The airline suspended flights from the UK’s second-largest airport on April 1 and has warned that flights may not resume.

In a leaked memo to staff operating out of LGW, first reported by the BBC, the airline’s management wrote: “As you know, we suspended our Gatwick flying schedule at the start of April and there is no certainty as to when or if these services can or will return.”

The potential exit from LGW comes days after the oneworld member formally notified its trade unions of plans for a major restructuring and redundancy program, with 12,000 jobs under threat. The airline furloughed 22,626 employees in April and more than 1,000 of the company’s 4,300 pilot jobs are understood to be at risk.

“We do not know when countries will reopen their borders or when the lockdowns will lift, and so we have to reimagine and reshape our airline and create a new future for our people, our customers and the destinations we serve,” BA CEO Alex Cruz said on April 28 after details of the planned job losses were released.

“The scale of this challenge requires substantial change so we are in a competitive and resilient position, not just to address the immediate COVID-19 pandemic, but also to withstand any longer-term reductions in customer demand, economic shocks or other events that could affect us. However, challenging this is, the longer we delay difficult decisions, the fewer options will be open to us.”

According to data provided by OAG Schedules Analyser, BA operated 74 routes from LGW in 2019 offering more than 4.4 million seats across 24,942 flight departures. The airline accounted for almost 17% of capacity from the airport during the year and nearly one-fifth of all flights. However, it had direct competition on three-quarters of the routes from one or more rival carriers.

Looking at the routes served from LGW last year, BA deployed the most capacity on flights to Jersey (JER) in the Channel Islands, offering a total of 469,702 two-way seats. The Spanish city of Malaga (AGP) was the second-largest route by capacity, with 365,780 seats, and Orlando (MCO) was third, with 360,502 seats. Glasgow (GLA) and Venice (VCE) completed the top five, with 359,118 and 354,030 available seats respectively.

Since the COVID-19 crisis began, the airport has temporarily consolidated operations into the South Terminal and limited scheduled flights to between 1,400 and 2,200 each day. It has also raised £300 million ($377 million) from a consortium of banks.

The airport said it expects passenger levels to return to “recent levels” within 36 to 48 months. 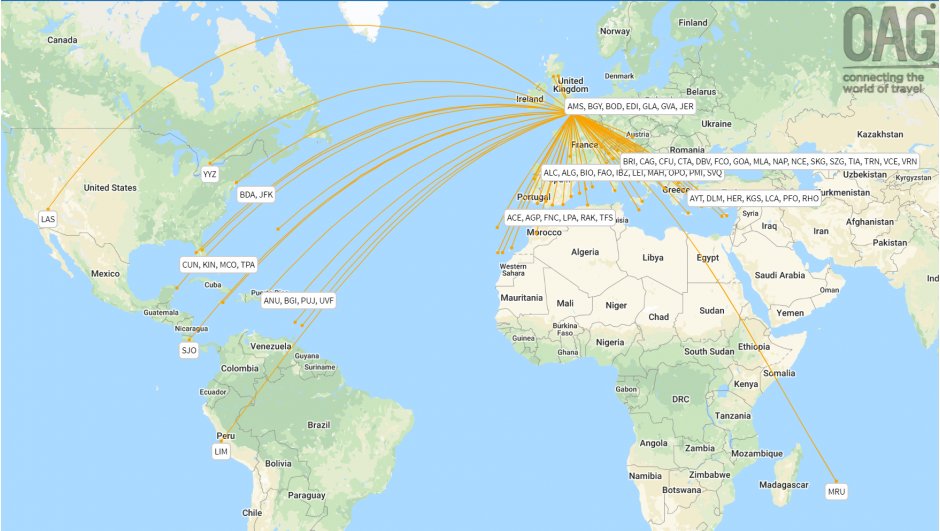