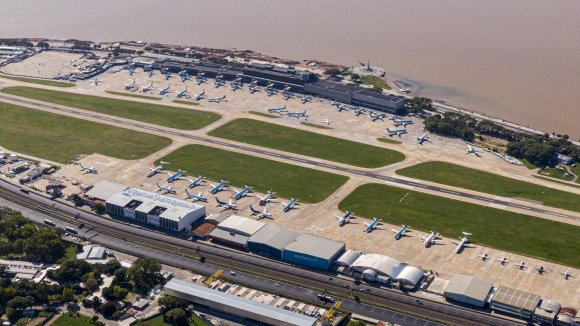 Argentina’s government has initiated plans to merge Aerolíneas Argentinas and Austral in order to improve efficiencies and reduce costs.

In a letter addressed to the workers of both companies, group president Pablo Ceriani said the running costs of the two carriers were “becoming unbearable” and so action was needed in order to survive the COVID-19 crisis.

“The government invests in its flag-carrier because this generates economic and social benefits that exceed the investment made,” Ceriani wrote. “However, in the face of such a severe crisis, even the most profitable investments are adjusted when it comes to priorities.”

The merger will begin when a shareholders’ meeting can next be held, but the process is expected to conclude before the end of the year. It will also allow for the creation of new business units in aircraft maintenance and cargo.

“We have a plan to transform the company, to make it grow and make it great,” Ceriani said. “Growth and development, however, can only be achieved through an efficient and sustainable work scheme.

“If we are not able to adopt the best practices of the industry, there will be no use in growing and the fate of the company will not be the one we dreamed of, but the opposite instead. Those companies which do not adapt to ongoing needs disappear.

“That will surely be the fate of Aerolíneas Argentinas if we do not rise to the occasion.”

Aerolíneas Argentinas was privatized in 1990 but returned to state control in 2008. The airline has a fleet of 55 aircraft, including 30 Boeing 787-800s, and has 12 737-8s on order. Austral is based at Aeroparque Jorge Newbery (AEP) in Buenos Aries and operates 26 Embraer ERJ190s.

Argentina’s United Aviation Unions has called for more clarity on the planned merger and requested an urgent meeting with Ceriani.

Analysis of data provided by OAG Schedules Analyser shows Aerolíneas Argentinas offered more than 16.9 million seats in 2019 across 138 routes, with 74% of seats offered on domestic services.

However, the SkyTeam alliance member operated flights to 12 international markets, the largest of which was Brazil. Austral serves mainly domestic destinations.

Argentina’s government has come under fire in recent weeks for its plans to ban all commercial flight ticket sales in the country until September. A decree, signed by the country’s National Civil Aviation Administration last week, stated that carriers should not be allowed to sell tickets for flights to, from and within Argentina for the next four months.

IATA, ALTA and ACI Latin America and Caribbean collectively urged Argentine authorities to consider the “imminent and substantial risks” represented by the decree. IATA warned that the ban will have a near $1 billion revenue impact.

The travel and tourism sector in Argentina contribute 10% to the nation’s GDP and generates 9.4% of the jobs in the country, securing employment for around 2 million people, according to studies by the World Travel and Tourism Council.