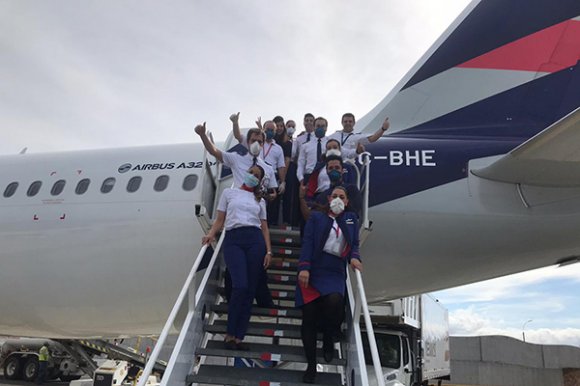 The number of departure seats across Latin America nudged up by almost 85,000 last week (w/c May 11) to total 1.24 million. During the same week a year ago, capacity totaled 8.23 million, meaning the continent’s market has reduced by 84.9% year-on-year.

Lower South America increased capacity by 56,000 seats last week, with Upper South America recording a rise of 44,000. However, both Central America and the Caribbean experienced falls in the number of departure seats, down 11,000 and 4,600 respectively.

The steepest capacity fall last week in numerical terms was in Chile, where the number of departure seats reduced by 36,866 seats compared with the previous seven days. Capacity from and within the country totaled 42,261seats, down from 439,000 this time a year ago.

According to the latest figures (May 22), there have been almost 58,000 confirmed cases of COVID-19 in Chile and 589 deaths. A state of emergency is currently in force and is expected to remain in place until June 16. The country’s borders remain closed to foreign travelers although the restrictions do not apply to Chilean nationals or residents.

Mexico recorded the second-largest capacity drop last week in numerical terms although the fall was not as sharp as in previous weeks. The number of departure seats fell by 13,568 to 243,020, a decrease of 5.3%. However, Mexico’s market remains the largest in Latin America.

There have been almost 60,000 confirmed COVID-19 cases in Mexico and 6,510 deaths. Earlier this month, the country’s government said that 269 coronavirus-free towns—out of a total of more than 2,450—could reopen from this week as part of a gradual easing of lockdown restrictions. Similar measures are scheduled to start June 1 in the rest of the country. However, reports suggest that many towns have resisted lifting the restrictions amid fears the move has come too soon.

Meanwhile, Brazil has become the country with the third-highest number of confirmed coronavirus infections in the world, after registering a total of more than 300,000 cases. There have also been in excess of 20,000 deaths. Earlier this week, US President Donald Trump said he’s considering banning travel from Brazil.

The below infographic shows the total capacity offered by airlines from and within Latin America since the beginning of March when COVID-19 restrictions started being imposed across the continent.

LATAM Airlines Group offered more than 1.7 million weekly departure seats during w/c Mar. 3, but this had reduced to just 63,731 last week. This equates to a 96.4% reduction. However, the airline this week confirmed it will gradually increase its international and domestic operations during June and July.

In June the LATAM group expects to increase its total pre-crisis capacity from 5% to 9%, while preparing to reach 18% in July. Fares will be about 20% cheaper than normal, the carrier said.

“The group is increasing flights, destinations and frequencies, and taking concrete measures that respond to the new economic reality that clients and their families are facing,” senior commercial VP Michael Rutter said.

Domestically, LATAM Airlines Brazil will operate 74 routes, while LATAM Airlines Chile will reach 12 destinations that include Easter Island (IPC), Copiapó (CPO), La Serena (LSC) and Temuco (ZCO). Similarly, the affiliate in Ecuador is working to resume its domestic flights in June, with the Colombian and Peruvian affiliates are expecting to re-establish their service in July, as permitted by local authorities.

Brazil’s Azul also plans to increase its June schedule to 168 flights per peak day, compared to 115 daily departures in May, and 70 flights per day in April. In addition, the carrier will be flying to 57 domestic destinations in June, up from 38 cities served in May and 25 in April.

“Although our June capacity is still approximately 80% down year over year, we are seeing a positive trend in demand since the outbreak of the COVID-19 pandemic,” Azul chief revenue officer Abhi Shah said.

“We will continue to monitor revenue conditions and expand our network as several cities in Brazil gradually lift travel restrictions and demand returns, especially in the state of São Paulo, which is expected to have restrictions eased starting in the first week of June.”

Panama’s Copa Airlines had hoped to resume operations from June 1, but this week extended its service suspension by a further four weeks. As reported by Airlineroute, the Star Alliance carrier now plans to gradually resume service by June 26.

Ecuador’s flag-carrier TAME is to be liquidated as part of a series of measures the country is taking to rebalance the economy in the wake of the COVID-19 pandemic.  President Lenín Moreno said that the airline has generated more than $400 million in losses over the past five years and previous efforts to turnaround the carrier had failed.

AeroMexico June 2020 International operations as of 17MAY20