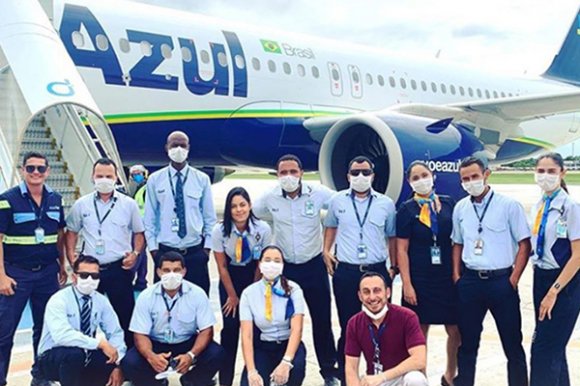 Welcome to Routes’ look at how the Latin American aviation market is recovering from the COVID-19 pandemic.

After the Latin American aviation market contracted by 17% during the previous seven days, there was an uptick in activity last week (w/c May 25) as the number of departure seats across the Latin America and Caribbean region rose by 6.6% to 1.09 million.

Declines of 6% and 2% in the Caribbean and Upper South America were offset by growth of 27% in Lower South America. However, the overall Latin America and Caribbean market remains 89% smaller than at the turn of the year.

Brazil this week overtook Italy as the country with the world’s third-highest number of COVID-19 fatalities. The country reported a new record of 1,473 deaths in 24 hours, official figures released on Thursday (June 4) show, bringing its overall toll to more than 34,000, behind only the US and UK.

However, the country has begun to ease restrictions with president Jair Bolsonaro—who has repeatedly downplayed the threat of the virus—saying death was “everyone's destiny.” He added that that the quarantine measures “can’t go on like this.”

OAG figures show Brazil’s aviation market was the second largest in Latin America last week with 222,008 departure seats, a week-on-week rise of 5.3%. More than 93% of the capacity was on domestic routes. The schedules data suggest a further 14% rise in the total number of departure seats this week.

Azul continues to rebuild its domestic network and in June expects to operate up to 168 flights per day compared with 115 daily departures in May and 70 in April. This week the airline confirmed it will resume service from Viracopos (VCP) from June 8, offering flights to Fortaleza (FOR), Porto Velho (PVH) and Palmas (PMW). GOL Linhas Aéreas also expects to operate about 100 daily flights in June, up from 68 in May.

The below infographic shows the weekly number of departure seats from and within Brazil alongside the number of confirmed COVID-19 deaths.

The number of deaths from COVID-19 has also spiked in Mexico. On Thursday, the country announced 816 more deaths, a day after reporting in excess of 1,000. The death toll now stands at more than 12,500. However, the government has sought to allay fears by saying many of the new deaths disclosed this week occurred in May and have only now been reported.

Mexico remains Latin America’s largest aviation market by capacity with 249,513 seats last week. Just 45,618 of these were on international services.

Volaris is among the Mexican airlines planning to increase capacity this month and hopes to resume flights to the US. It expects to operate approximately 33% of its originally planned schedule in June, responding to “recent stronger demand.” The ULCC transported 213,000 passengers during May, a decrease of 88.9% year-on-year.

Elsewhere in Latin America, Chile’s LATAM Airlines Group, which filed for bankruptcy protection last week, has reported a $2.12 billion loss in the first quarter of 2020 after an accounting adjustment of its assets. This mainly comprised a goodwill impairment loss of $1.73 billion as a result of the coronavirus pandemic. The group expects to increase its capacity from the 5% of the pre-crisis total operated in May to 9% in June, while preparing to reach 18% in July.