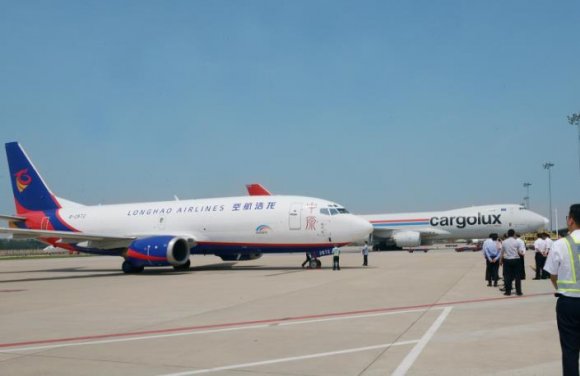 Despite the delayed start of Henan Cargo Airlines, the air freight network of Zhengzhou Xinzheng International Airport (CGO) and Cargolux in China and beyond has been strengthened by regional cargo carrier Zhongyuan Longhao Airlines.

Cargo coverage from CGO now extends from Europe to east and southeast Asia, where it counts Osaka (KIX), Japan and Hanoi (HAN), Vietnam among its destinations.

The relationship between Zhongyuan Longhao, Cargolux and CGO is complex. In 2013, Henan Civil Aviation & Development Co (HNCA) acquired a 35% share in Cargolux and made CGO—which serves Henan’s provincial capital Zhengzhou—the European freight operator’s hub in China. HNCA then looked for a regional carrier under a Chinese AOC to fulfill distribution of cargo within China and the region.

In 2017, Cargolux, HNCA and Xinggang Investment Group signed a joint venture equity contract to establish Henan Cargo Airlines—formally known as Cargolux China—with Cargolux holding a 25% stake. Initially planned to commence business in 2018 with Boeing 747-400F, the carrier has yet to take off due to “technical issues and lack of pilots,” according to Cargolux CEO Richard Forson. Other reports suggests growing US-China trade tensions have delayed discussions.

Not wanting to wait further, state-owned HNCA acquired Guangzhou-based airline Zhongyuan Longhao in June 2019 and made CGO its second hub, fulfilling its objective for a Henan-based freighter company to complement Cargolux.

HNCA chairman Zhang Mingchao told state news agency Xinhua that regardless of which airline is set up, the primary goal is to develop CGO as a cargo hub. He said the next step would be to make full use of the dual airline operations, increase capacity, and improve airlinks in the aviation Silk Road between Europe and China.