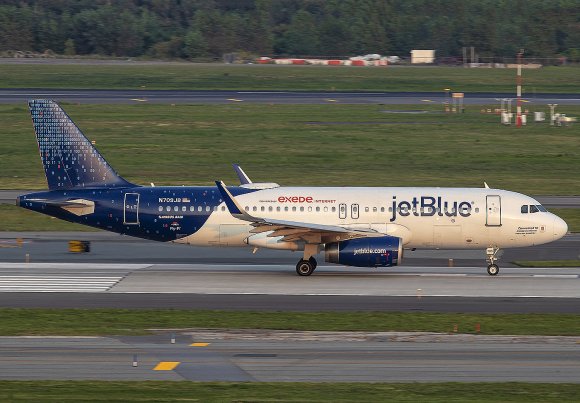 JetBlue Airways is introducing 30 new routes to its domestic network over the next few months in markets where leisure and VFR travel is showing “some signs of strength.” As well as adding point-to-point routes to warm-weather destinations in Florida, from the likes Chicago (ORD), Pittsburgh (PIT) and Washington National (DCA), the airline is further building its presence in the New York-area. It plans to launch flights from its New York John F Kennedy (JFK) home to a number of competitor hubs, as well as muscling in on United Airlines’ stronghold at Newark (EWR).

JetBlue operated 10 routes from EWR prior to the COVID-19 crisis and has traditionally competed with United on routes to Florida and Puerto Rico. However, the carrier plans to launch four services from the airport on July 23—to Charleston (CHS), Jacksonville (JAX), Los Angeles (LAX) and San Francisco (SFO)—with a further five following from Aug. 6. New destinations include Austin-Bergstrom (AUS), Las Vegas (LAS), Phoenix Sky Harbour (PHX), San Diego (SAN) and Sarasota-Bradenton (SRQ).

The services to LAX and SFO are particularly eye-catching, given JetBlue is planning to operate the routes using Airbus A321 aircraft featuring its Mint business class offering. The carrier will fly to LAX up to 3X-daily and SFO up to 2X-daily. Although these are much lower frequencies than United provided prior to the coronavirus pandemic, the Star Alliance member has taken a conservative approach to resuming capacity. According to OAG Schedules Analyser, this week (w/c June 22) it will offer 3X-daily flights to LAX and 4X-daily to SFO. Given Southwest’s decision last year to cease operations at EWR, JetBlue’s expansion from the airport could therefore be a timely move.

Japanese LCC Peach Aviation plans to launch two new domestic routes in August from Tokyo Narita (NRT). The airline, owned by All Nippon Airways (ANA), will connect Japan’s capital with Kushiro (KUH), a city on the island of Hokkaido, and Miyazaki (KMI), located on the island of Kyushu.

The route between NRT and KUH will be the first service to connect NRT with eastern Hokkaido. Eastern Hokkaido is a popular tourist destination, boasting four national parks including Shiretoko, a World Heritage site. Peach will offer daily service on the route on board A320-200 aircraft, starting on Aug. 1.

The new service to KMI will also be daily from Aug. 1. The route marks Peach’s fifth serving Kyushu to and from NRT, along with Fukuoka (FUK), Amami (ASJ), Nagasaki (NGS) and Kagoshima (KOJ).

Following the two route launches, the number destinations served by Peach from NRT will rise to 12, 10 of which are domestic. The airline suspended service on some routes due to the spread of COVID-19, but all domestic services are scheduled to have resumed by July 22.

Lufthansa has today resumed service to Shanghai (PVG), its first regular scheduled flights to mainland China since early February as the COVID-19 outbreak escalated. Germany’s flag carrier will offer one flight from Frankfurt (FRA) to PVG every Wednesday, with return flights every Friday. As reported by Airlineroute, service will initially be operated by Airbus A340-300 aircraft, switching to Boeing 747-8I from July 1.

Lufthansa is among the first foreign airlines to resume regular scheduled passenger flights to China now that the Civil Aviation Administration of China has begun to ease travel restrictions. Previous regulations in place said that foreign carriers could operate no more than one weekly flight to China, but that airlines could not exceed the level of service they were offering on March 12. However, airlines can now choose from a list of approved Chinese cities to operate one international passenger flight a week. If a flight’s passengers test negative for the virus for three consecutive weeks, the airline will be able to add one additional fight per week.