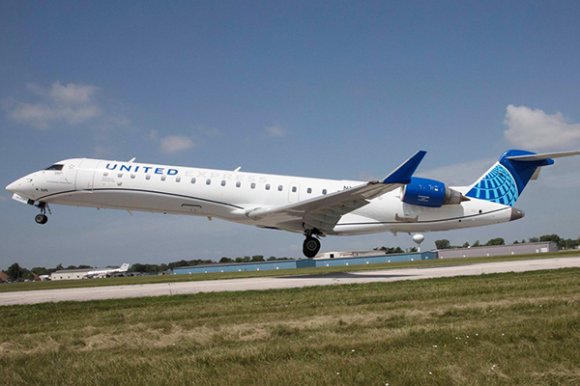 United Airlines will add close to 25,000 flights in August, as it cautiously restores capacity in response to steadily increasing domestic travel demand.

The growth will see Chicago-based United operate 48% of last year’s domestic capacity and 25% of international capacity in August, amounting to a tripling of its schedule from June.

The additions include more than 600 daily flights to more than 200 US airports, including 350 daily flights spread across United’s hubs. Daily flights out of Newark (EWR) will double from July, while the carrier’s midcontinental hubs in Chicago (ORD), Denver (DEN) and Houston (IAH) will also see substantial growth.

United will return 90 aircraft to service to facilitate the increased flying, including an unspecified number of 50-seat Bombardier CRJ-550s, which include 10 seats in first class.

Much of the increase is destined for mountain and natural park destinations like Aspen (ASE), Colorado; Jackson Hole (JAC), Wyoming; Bangor (BGR), Maine; and Bozeman (BZN), Montana, in an effort to capture increased demand for outdoor leisure travel this summer.

“We’re adding in flights to places we know customers want to travel to, like outdoor recreation destinations where social distancing is easier but doing so in a way that’s flexible and allows us to adjust should that demand change,” United VP-domestic network planning Ankit Gupta said.

United will continue operating to European cities despite the EU’s ban on incoming arrivals by US citizens, and is planning to operate the routes as repatriation flights pending removal of the restrictions. Plans to add service to European cities like Brussels (BRU) and Frankfurt (FRA) from ORD, and BRU and Munich (MUC) from EWR, are still on track, a spokesperson confirmed.

United is set to resume a host of routes across the Pacific in August, including resumption of 5X-weekly SFO-Hong Kong (HKG) service and twice-weekly SFO-Shanghai (PVG) service. New 5X-weekly service between ORD and Tokyo Haneda (HND) will launch next month, while daily service from EWR and SFO to Tokyo Narita (NRT) will continue.

While a substantial increase from its existing flying levels, the additions for United are still less than those of its network airline rivals. American Airlines, for example, is targeting as much as 65% of last year’s domestic capacity for July, compared to United’s 48% by August. Delta Air Lines, meanwhile, will operate between 55% and 60% of last year’s domestic schedule by August, CEO Ed Bastian estimated at its annual shareholder meeting.

The additions come as passenger throughput data tracked by the TSA at US airports continues to trend upwards, a sign that has airline executives feeling cautiously optimistic despite a recent uptick in confirmed coronavirus cases in many states. Sunday, June 28, was the busiest travel day since March 19, with more than 633,000 people passing through TSA checkpoints, although still down 75.9% from a year ago.