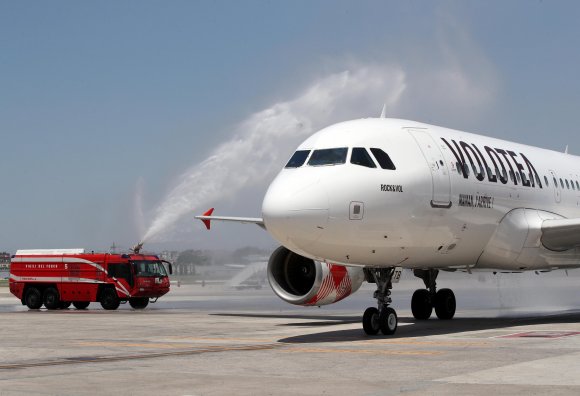 Leisure-focused LCC Volotea has launched a new base in Naples (NAP) as part of plans to bolster its route network in Italy.

The airline has stationed two 156-seat Airbus A319s at the airport, which was already the third largest in its network last year based on the number of departure seats.

“At this particularly challenging time, the opening of our sixth Italian base has taken on a great symbolic significance: it confirms our commitment to supporting the Campanian economy at the time of reopening of the Italian tourism industry,” Volotea president and founder Carlos Muñoz said.

“As well as consolidating our routes to some of Italy’s biggest destinations, the official launch of flights from the new Naples base will mean the creation of new direct and indirect jobs locally.”

From NAP, Volotea will offer a range of domestic services, including: 2X-daily flights to PMO; 11X-weekly to Catania (CTA); 7X-weekly to Olbia (OLB); 6X-weekly to CAG; 5X-weekly to GOA; 2X-weekly to Turin (TRN); and 2X-weekly to Alghero (AHO) . Two flights per week are also available to Trieste (TRS) and VRN, rising up to 6X-weekly in September.

Internationally, the carrier will connect NAP with a range of Greek island destinations. Mykonos (JMK) will be served with up to five weekly flights; Santorini (JTR) with four weekly services; Heraklion (HER), Zante (ZTH) and Skiathos (JSI) 3X-weekly; Rhodes (RHO) 2X-weekly; and one flight per week will be offered to Kefalonia (EFL). Aktion (PVK), on the Greek mainland, will be also be served once a week.

Roberto Barbieri, CEO of NAP’s majority owner GESAC, praised Volotea for launch of the new base during “the delicate, complex reopening phase” following the travel restrictions put in place to curb the spread of COVID-19.

“This operation responds to our main objectives: reinstating connectivity, contributing to the resumption of the tourist industry, generating jobs and stimulating the local economy,” he added.

According to OAG Schedules Analyser data, NAP was the third largest airport in Volotea’s network during 2019 by capacity with 459,612 departure seats. This put it behind only Nantes (NTE), where 576,090 seats were offered, and VRN, where there were 473,216 departure seats.

Volotea restarted operations on June 16 after three months without flights because of the coronavirus pandemic. This summer the LCC plans to offer 274 routes across its network, of which 165 are domestic.