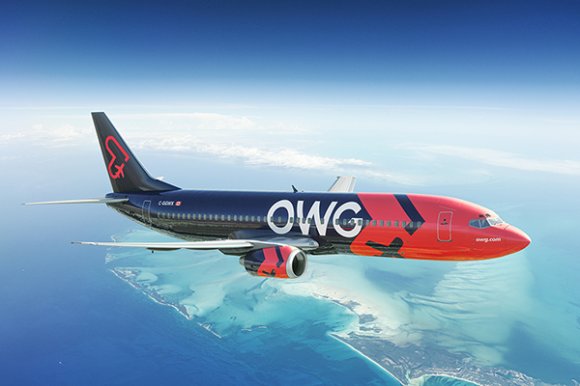 A new Canadian airline is set to launch later this year that will operate scheduled passenger routes to tourist destinations in the Caribbean.

Nolinor Aviation is behind the new carrier that will operate under the brand OWG, which stands for Off We Go.

The Quebec-based start-up has been in the works since 2018 and received authorization from Canada’s Minister of Transport on July 6 to begin international services.

“Traditional airlines have chosen to cut the quality of their services year after year with no regard for the passenger experience,” Nolinor president Marco Prud’homme said.

“Our goal is to win the hearts of Quebecers with a new airline whose mission is to get travelers excited again.”

Nolinor has offered charter flights for the past 27 years, mainly to destinations in the far north using its fleet of 10 Boeing 737s. However, OWG will be the company’s first foray into scheduled service and leisure flights.

OWG will operate three 158-seat Boeing 737-400s, which were acquired earlier this year and are being refurbished at a cost of “several millions of dollars.”

The airline is yet to confirm its route network but intends to fly to warm-weather destinations in the Caribbean.

It is understood the carrier expects to start operations in the next few months as travel restrictions brought in to curb the spread of COVID-19 continue to be eased.

The start-up added: “With respect to in-flight protection standards against COVID-19, the OWG crew will benefit from the expertise developed by Nolinor Aviation during the crisis, while they continued to serve certain northern destinations by applying the highest standards in terms of health and safety.”