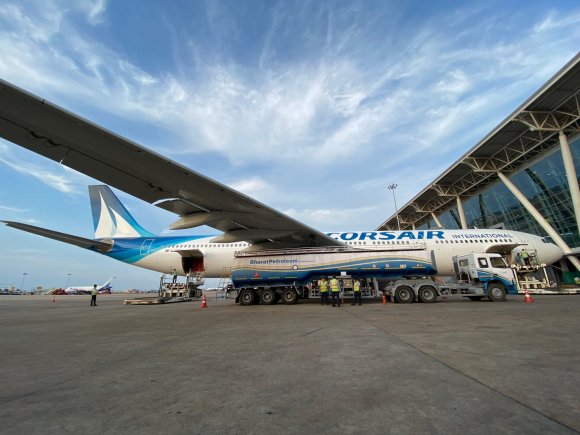 French leisure airline Corsair is evaluating the launch of long-haul flights from Germany, providing negotiations with potential new shareholders have been completed successfully.

“If we stay on board with Corsair, then we plan to target flights from Germany on some selected long-haul routes which fit into Corsair’s existing network,” MD of INTRO Aviation and Corsair Chairman Peter Oncken told Aviation Week Network in an exclusive interview.

“We planned to do this as from 2023 anyway, but I believe a bit more competition in Germany already in the next few years would make sense,” he said.

Oncken added that there are certain regions in Germany he has in mind from where offering such long-haul services would be successful. “We would then of course need English and preferably German-speaking cabin crews on board,” Oncken said, adding that Corsair is already on track to be able to provide this.

Corsair currently only serves long-haul leisure routes from France. Its fleet was grounded following the coronavirus outbreak, but now the airline has begun returning to the skies from its Paris Orly (ORY) base. In June, Corsair resumed service to French overseas departments Fort-de-France (FDF), Martinique; Pointe-a-Pitre (PTP), Guadeloupe; and Saint-Denis (RUN), Réunion. On July 8 Corsair restarted flying to Abidjan (ABJ) in Ghana, and Montréal (YUL) is set to follow on July 16.

Meanwhile, talks with potential new shareholders which could see German investor INTRO part with some or all of its 53% stake in the carrier are ongoing. INTRO has owned shares in Corsair since 2019. Minority shareholder TUI holds 27% of the airline. The rest of the stock is held by an employee trust.

“Negotiations are very positive, and I hope that we will have found a solution within the next weeks. But there is still some homework to be done,” Oncken said. Corsair had been working on a turnaround plan before the COVID-19 crisis.

“Another market where we are interested in is Africa. But to extend the network is mainly a question of available traffic rights, which are dominated by Air France,” he said.

“Long-haul leisure flights are making sense from France as this is a strong core market. But we would never do ultra-long-haul flights like to Tahiti in French Polynesia. This is simply inefficient and too expensive, apart from the fact that Corsair does not have suitable aircraft to do that“.

But to increase aircraft productivity, flights to Asia would be of interest.  “It would make sense when you can utilize the long-haul fleet to the Eastern and the Western hemispheres. But competition to Asia is massive,” Oncken said.

Corsair has two Airbus A330-200s and three A330-300s in its fleet. It has five A330neos on order, but deliveries will be delayed after the production stop at Airbus.