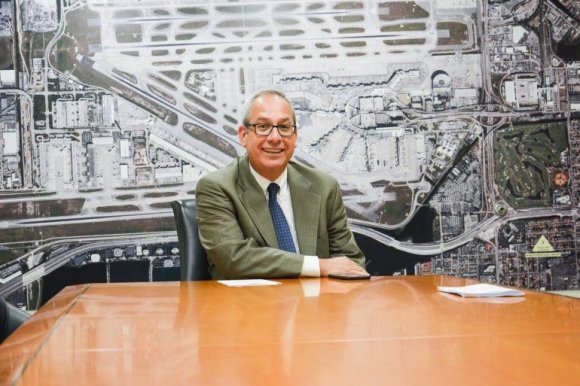 MIA CEO Lester Sola discusses how the airport can support airlines to recover their networks, the advantage of being a US ‘funnel airport’ and what will drive the return of demand.

How badly has the airport been affected by COVID-19?

Our average per day last week was around 30,000, so it’s a significant drop. But at one point in March, at the start of the pandemic, we had 3,500 passengers in a day, so you can imagine that drop in an airport that's really built to handle 55 million passengers. It's really a remarkable number.

Your passengers drop but your fixed costs don’t—how has that affected the airport?

The airport is very financially sound and we have a significant amount of cash on reserve, as well as restricted cash. We've been able to weather the storm and our forecast is that we'll still be able to weather it now the revenues have continued to increase month-over-month from our lowest point in March.

Is the cargo growth in medical supplies? Or more in consumer goods?

You have to remember our geographic location: MIA is gateway to the Americas and the Caribbean. All this PPE and pharmaceuticals are going through MIA into the Caribbean market and Latin America. While some Latin American and Caribbean countries have closed their borders for passengers, the commerce still has to take place. Everything that's usually going down to South America or the Caribbean, such as electronics, perishables, fish and meat… All that is coming through MIA, in addition to the pharmaceuticals. Products still have to move and the new products are really in demand in order to deal with the pandemic.

How are your conversations progressing with your airline partners?

We’re really unique in that we've had in excess of 100 airlines operating at this airport. Every type of airline has operated—and done very well—at this airport.

The America-based legacy carriers who operate here and some of the low-cost carriers have been able to receive federal aid, and MIA basically put together a relief program. That was actually approved before the Federal program that basically allowed them to abate—to not pay or to defer—rent on a monthly basis. We've been able to defer that rent for up to six months and give them a year-long repayment period, something that other airports hadn’t done by that time.

That really helped them, and in our position, we wanted to make sure that they understood that we were partners, not just during the good times but also during the difficult times, so we've done everything possible to assist them. In all of our communications they're very grateful for the steps that the airport has taken to really reduce their cost of operating here.

Was this in response to the airlines asking for help, or MIA putting together a program proactively?

It was before a single airline had reached out to us and asked for relief; we had already put together a relief package. We met with our airline partners, not just the large carriers but our whole market; we actually have a user group that we meet with on a monthly basis, so we did this the moment the epidemic situation started to just show signs of getting really difficult.

In the early months we had communicated to them that we were looking to put together a relief package for them. And we were able to get that approved by the board of directors, our board of county commissioners and our mayor very early on. In fact, it became a model of what the airlines then used to leverage against other airports when they saw the relief package from MIA.

We also provided relief to the concessionaires, so they basically are not paying rent, nothing whatsoever. There’s 100% forgiveness of the rent and 100% forgiveness of revenue guarantees; all that the concessionaires are paying us at this airport is a percentage of sales. So if their contract states that they have to give 10% of their gross sales back to the airport, that is the only thing, and everything else is being 100% waived. So again, that program has been used as a bargaining tool with other airports when airlines and concessionaires are speaking to their partners.

Are you seeing demand returning well?

As I said, we hit a low point and we had just 44 flights coming out of this airport per day when we're used to doing 1,000 flights a day. We had 44, then we hit 100. Now we’re in the 200s; as the airlines started to put more of their fleet into operation, you actually saw that demand. The demand was there; people still had to travel, whether for business or visiting a family member. There was still a need for citizens to find the most efficient and cheapest way to get from point A to point B, and that’s often via air travel so that supply is going to meet that demand.

You obviously have a very diverse network given your geographical position: holiday attractions around you, a multicultural city, and business. What elements will drive that demand?

Our geographic location is important; you will have leisure travel into this market. We have historically been exactly 50% domestic and 50% international, but during the last few months it's been primarily domestic travel. And not just because the Latin American countries were closed. I think there's a confidence level when flying within the States, and you had a lot of Americans thinking that they were going to travel this year. Miami Beach and other beaches become a destination of choice.

I think that's natural, but you also have a situation where these Latin American and Caribbean countries have been opening up, and we have always been a location that is culturally diverse. South American and Caribbean people feel very comfortable not just visiting here, but also living here, having second homes, and having businesses.

We're constantly flying around the world trying to establish new routes. One of my last travels was into Brazil—Miami has always had a significant population size from Brazil, just like Argentina. For their teenagers it's almost like a rite of passage: their first trip to the States was to Miami because it was culturally diverse and easy for them to travel and speak the language. I think that we'll be able to continue to develop on that into the future, so I think the recovery will be into the Latin and South American markets internationally, and domestically we will continue to be a location of choice.

The US has released its list of 15 funneling airports for international travel, and MIA is on there. That must be an advantage?

Originally when the first restriction was to the Asian markets, Miami was not on the original list of those airports. However, we were following the same exact protocols, so why was that?

The reason was that you had South American passengers who have visited China or Asia, had returned back home—to, let's just say Colombia—and they were going to be travelling to Miami as they normally do.

With the technology that not just the airport has but also Border Patrol, we were able to recognize passengers before they arrived at MIA that had visited the Asian areas, so we had to follow the same exact protocols here, although we were not on the original list. It became very easy for Customs and Border Protection, the CDC and other federal agencies, to—when some of the restrictions started taking place in the European markets— add Miami onto that list, because we were already doing the same exact protocols as the other regional airports.

Does it put us at an advantage? Absolutely. Its funneled passengers through this airport that maybe were not accustomed to coming here. But also, we've been having conversations with airlines even during the downturn who are looking to establish new routes. Every time you're able to adapt to the situation and make yourself part of the solution to the government, the federal government or the airlines, it puts you in a position of highlighting your opportunity to establish new routes.

How about transatlantic travel, now that restrictions are easing in the EU and UK?

We have one flight right now to London, and that’s being operated by American Airlines. We're certainly glad that we still have that one flight; at the point of our lowest volume of passengers, that flight was actually flying only with cargo. But that continuation of activity to the UK really provided us with relief, not just in wanting to maintain a connection to the European market but also because we had individuals who were either trying to get home from European markets to the States and they were using MIA as the entry point. Hopefully when the UK markets open up completely to the American markets, we'll be able to expand like we have in the past.

How have your wider stakeholder group in Miami supported you?

We have two large groups. There’s the Visitor and Convention Bureau that travel to pitch not just MIA but Miami as a destination. There’s also the Hotel Association that's also a big partner as well. I think that at like no time before, coordination between these agencies is needed to deliver a precise and concise message of faith to travel. You're welcome to travel. We want you to travel. And this is a place where you can travel.

It could not be more important during this time period. We will always focus on bringing international travelers into Miami, but you're going to find that some of these markets remain closed and we have been able to pivot to other markets, including domestic travelers, and say that Miami is not just a location for international passengers but also domestic passengers. You have to be diverse enough to know where the potential visitors are and really develop a partnership with the airlines to create those routes, because if we do it on our own without considering what these airlines’ needs are then we may be expecting resources in areas that we just don't have the connectivity to.

Final question, and it’s a tough one: When do you think MIA will reach pre-COVID-19 traffic levels?

If you had asked me that in March, I would have told you—and a couple of airlines too—that by the summer we would be seeing a significant recovery. I think this recovery will take a little longer, our forecast is that we'll finish the year with a 50% reduction in traffic. If we did 46 million passengers last year then maybe we could end up somewhere in the neighborhood of 23-25 million passengers. That, for us, would be a success.

There are a lot of variables at play here, including whether there's a vaccine or a treatment so that people aren't dying. After that, you’re probably looking at a recovery into the year of 2021 to hit 2019 levels.