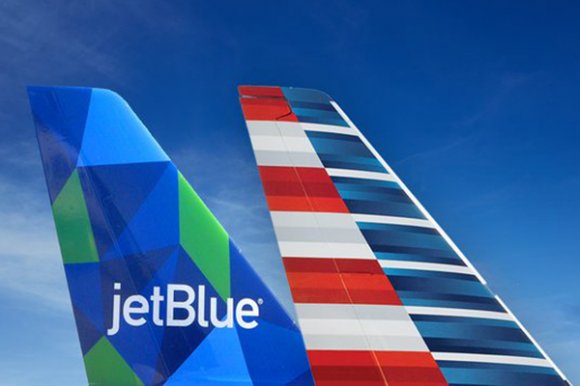 A new alliance is being formed by American Airlines and JetBlue that looks set to shake-up competition on the US East Coast.

The agreement will include reciprocal codeshare flights on more than 60 routes operated by American and 130 by JetBlue, as well as loyalty benefits for passengers.

Passengers will be offered “seamless connections” on routes covered by the deal, the airlines said, and it will allow them to expand their presence in Boston and the greater New York City area. They also hope it will help to speed their recovery from the coronavirus pandemic.

American will also launch service from New York (JFK) to Tel Aviv (TLV) in Israel and Athens (ATH) in Greece, while seasonal flights to Rio de Janeiro (GIG) will return in 2021.

In turn, JetBlue plans to accelerate its growth by adding flights at LaGuardia (LGA) and Newark (EWR), as well as increasing its presence at its JFK home base. Together, the carriers expect to operate 489 daily flights and serve 120 destinations from greater New York City.

“This partnership with American is the next step in our plan to accelerate our coronavirus recovery, get our crewmembers and our aircraft flying again, and fuel JetBlue’s growth into the future,” she said.

Upon the implementation of the alliance agreement, American's JFK-TLV route and new seasonal JFK-ATH service next summer are designed meet the “strong local demand.”

The new nonstop routes to TLV and ATH from JFK will be the first long-haul international flights that American has launched from New York in more than four years.

American will also operate daily seasonal service to GIG beginning in winter 2021, during the peak summer travel period in Rio de Janeiro. And, once the coronavirus crisis has ended, the airlines said the partnership is “certain to facilitate American adding new long-haul markets in Europe, Africa, India and South America.”

The planned alliance is similar to a partnership American and Alaska Airlines struck on the West Coast weeks before the coronavirus crisis grounded much of the world’s aviation industry. As part of that deal, the two airlines will continue their domestic codeshare—which was scheduled to shrink in March 2020—and expand it to include international routes from LAX and Seattle (SEA).

Alaska will also join the oneworld alliance, although JetBlue has no plans to do so.

Details of JetBlue’s plans to increase flying out of New York’s three major airports have not been released, but its growth at JFK will be aimed at providing feed for American’s international routes. JFK is already JetBlue’s largest base from which it offered more than 8.7 million departure seats in 2019, while American’s presence there has been shrinking in recent years.

In June, JetBlue announced plans to add 30 new routes to its domestic network in a bid to capitalize on a modest upswing in leisure travel demand. The new routes are largely focused on connecting passengers from the New York-area to beach and outdoor leisure destinations in Florida and the western US. They will be added in three phases in July, August and October.

Other routes being launched include service from EWR to Charleston (CHS), South Carolina and Jacksonville (JAX), Florida; and from JFK to Dallas/Fort Worth (DFW) and Detroit (DTW).