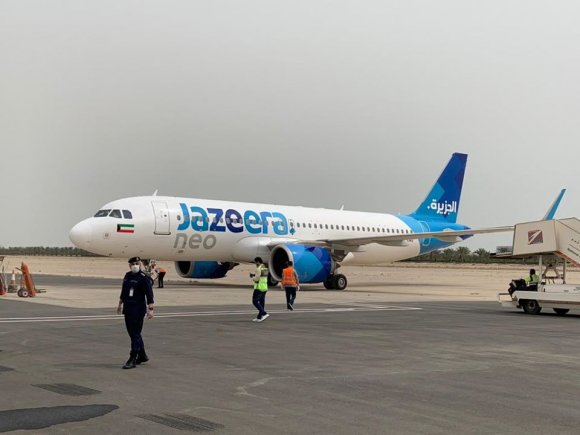 Kuwaiti hybrid carrier Jazeera Airways plans to resume flying on Aug. 1 as the emirate emerges from the coronavirus pandemic.

National flag-carrier Kuwait Airways also plans to resume limited scheduled services to a selection of destinations on that day.

The small desert state’s sole air entry point, Kuwait International Airport (KWI), has been closed since March 13, with the exception of repatriation, freight and emergency flights.

Jazeera will resume flights to 20 destinations in the Middle East as well as in India and Turkey, although at considerably reduced frequencies compared to the pre-pandemic period.

Initial services will focus on high-demand cities such as Amman, Beirut, Dubai, Istanbul and Riyadh.

“We anticipate demand will be strong in August and our schedule focuses on the most desirable routes—whether people want to fly to visit the family or for medical, touristic and business purposes,” Jazeera CEO Rohit Ramachandran said.

One notable absence from the list is London Gatwick (LGW). Jazeera began to operate the Kuwait- to-London route late in 2019 with its newly delivered Airbus A320neo, which conferred the necessary range to reach the UK capital.

Jazeera said that London was not being reinstated because of the continuing demand of the British government that travelers from all states not on a “green” or “amber” list must serve a 14-day quarantine period on arrival in the UK.

This had dampened demand for London tickets, a Jazeera spokesman told Routes, but the company planned to reinstate the service as soon as possible.

Kuwait Airways, meanwhile, has said that it will restart services to London on Aug. 1, together with 19 other destinations, primarily around the Gulf, Turkey and the Indian subcontinent.

The airline said that it plans to gradually step up its network services “in accordance with the Kuwait Government’s instructions and destination governments’ guideline.”