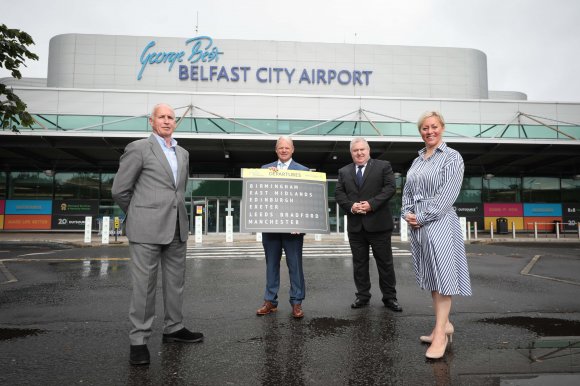 Aer Lingus Regional is to open a base at Belfast City Airport (BHD) with the launch of six routes operated by Stobart Air.

The new routes will replace a significant chunk of the services lost when regional carrier Flybe collapsed in March. Flybe was the largest operator from BHD in 2019 with a 68% share of all departure seats, according to data provided by OAG Schedules Analyser.

“Despite an extremely challenging environment, we’re delighted that Aer Lingus is to establish a new base and significantly enhance its UK network from Belfast City,” BHD CEO Brian Ambrose (pictured, center-left) said.

“As an island off an island, air connectivity with the rest of UK is critical to the enabling [of] Northern Ireland [economic] recovery.”

From Aug. 27, flights from BHD to EDI will begin, while services to EXT will commence a day later. Flights to MAN and BHX will operate from Sept. 14 and to EMA and LBA from Oct. 1.

Aer Lingus CCO David Shepherd (pictured, center-right) said: “Together with our up to three-times-daily service from Belfast City Airport to London, today’s announcement means Aer Lingus/Aer Lingus Regional, operated by Stobart Air, is the largest operator out of Belfast City Airport, ensuring connectivity between Northern Ireland and the rest of the UK.”

All six of the new routes being launched were previously operated by Flybe, which flew to 14 destinations from BHD in 2019 and offered more than 1 million departure seats. The airline failed in March, less than two months after the UK government announced a rescue deal.