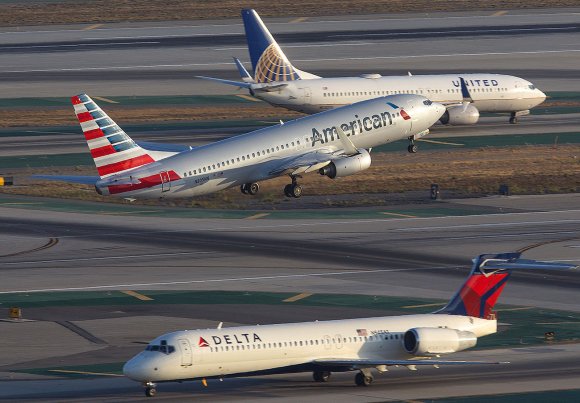 The capacity strategies of American Airlines, Delta Air Lines and United Airlines are converging, reflecting a new consensus about demand in the US and the most rational way to serve it.

American has operated a much larger schedule than Delta and United through the COVID-19 pandemic in an attempt to gain market share by capitalizing on the strength of its two largest hubs in Dallas-Fort Worth (DFW) and Charlotte (CLT), North Carolina. With coronavirus cases spreading across the US South, including the regions surrounding both airports, American’s pace of growth has stalled. Management now expects third-quarter (Q3) capacity to be just 40% of last year’s amount, indicating no immediate plans to grow the schedule beyond levels seen in July.

American chairman and CEO Doug Parker, speaking on the Fort Worth-based company’s Q2 earnings call, expressed no regret about the decision to add capacity back earlier than Delta or United, and said the increased flying helped American achieve a six-fold increase in unit revenues between April and June.

“Our network team did a phenomenal job of seeing that, while connectivity had been reduced throughout the country, by focusing on our DFW and Charlotte hubs, we could have the ability to have more connectivity than others,” Parker said. “That gave us an advantage in going after the limited demand that was out there.”

American chief revenue officer Vasu Raja said DFW and Charlotte both produced RASM between $0.11 and $0.12 in June, which he called “a really good result for many of the airlines all around the world.” The company deployed roughly 60% of total June capacity across the two hubs, as it looked to consolidate capacity in areas that were less affected by COVID-19 at the time.

“It was really a one-time thing that we did, knowing that June and July would be months where there were discretionary leisure travelers,” Raja said.

United, by contrast, took the most cautious approach among its peers during the pandemic. The Chicago-based carrier operated just 12% of its year-ago capacity in Q2, less than half of what American flew. Management now expects capacity to reach 35% in Q3, more than double the previous quarter’s amount, and just shy of American’s 40%.

Mirroring the attitude at American, United’s executives credited their disciplined approach to capacity during the early stages of the pandemic with helping the company realize the smallest net loss among the “Big 3.”

“Our network peers flew more capacity than United, and we believe our careful management of capacity…is the primary driver of our good results relative to our network peers in terms of absolute losses and cash burn,” United chief commercial officer Andew Nocella said on the company’s latest earnings call.

Delta, on the other hand, now plans to operate the least capacity of the three airlines, which CEO Ed Bastian predicts will only be between 20% and 25% of last year’s level when 60% load factor caps in place across its fleet are factored in. Excluding the caps, Delta will operate between 35% and 40% of original capacity in the quarter, roughly in line with its peers.