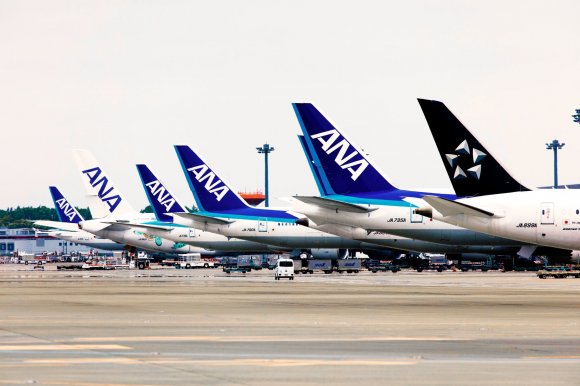 All Nippon Airways’ (ANA) significant cost-cutting efforts have been dwarfed by the massive revenue loss caused by the COVID-19 crisis, resulting in heavy net losses for the June quarter.

The carrier fell to a net loss of ¥108.8 billion ($1 billion) for the three months through June 30, its fiscal first quarter. This was a reversal from a ¥11.4 billion profit in the same period a year earlier, although such comparisons are meaningless considering the scale of the financial damage from the COVID-19 pandemic.

ANA usually provides a profit forecast for the full fiscal year, but this time the carrier decided not to because of the “climate of global economic uncertainty” caused by COVID-19.

ANA managed to cut quarterly operating costs by ¥203.6 billion, or 42%. Lower fuel costs and airport charges were a major contributor, with a large part of the fleet was grounded and some fee deferrals were granted. Labor costs were also down, as management salaries were reduced and a temporary leave program was expanded.

However, operating revenue plunged by ¥378.9 billion in the quarter, representing a 75.7% decline. The drop was particularly steep in the international division, with revenue down by 94.2% in the quarter as most services remain suspended.

The domestic operation saw a smaller decrease. Revenue dropped 86.5% year-ovder-year, with capacity down 73.3%. The carrier is increasing domestic capacity again after hitting a low point of 14.8% in May. Domestic capacity has recovered faster for ANA LCC subsidiary Peach than for the parent airline.

These revenue trends were essentially reversed in the cargo division. Domestic cargo revenues were down by 41.5% in the quarter, while international cargo declined by just 2.7%. Supply was much tighter for international freight due to the grounding of passenger aircraft, but demand was still high due to medical and essential supply shipments.

In terms of fleet, the ANA Group had a total of 300 aircraft as of June 30, three fewer than on March 31. The total includes 32 aircraft operated by Peach.