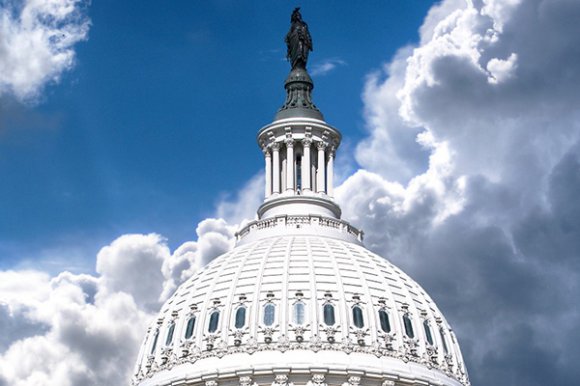 A majority of US House of Representatives members have signed a letter urging leaders from both chambers of Congress to extend the CARES Act's Payroll Support Program (PSP) until March 31, 2021, arguing that failure to do so will lead to hundreds of thousands of job losses across the airline industry this fall.

Passed as part of the CARES Act coronavirus stimulus package on March 31, the PSP provided $32 billion to fund airline industry payrolls for six months through September 30, by which time lawmakers expected travel demand to have recovered substantially from late March levels. But with that deadline fast approaching, passenger throughput has only rebounded to around 20-25% of last year’s level, and executives at large network carriers have formally warned upwards of 60,000 employees they may be let go on October 1.

“Without further relief from Congress, mass layoffs among airline industry workers are inevitable—and their magnitude will eclipse those of any furloughs the industry has ever seen,” the lawmakers wrote on July 27, led by House Transportation Committee chairman Peter DeFazio (D-Oregon). A total of 223 legislators signed onto the letter, including the vast majority of the lower chamber’s Democrats and several dozen Republicans.

The push to renew the PSP comes as Congressional negotiators are struggling to reach agreement on the contours of a fifth stimulus package, which lawmakers hope to accomplish before they break for recess in the second week of August. Senate Republicans unveiled their own proposal this week, which does not include additional funding for airlines.

A dozen aviation employee unions, including the Air Line Pilots Association and Association of Flight Attendants-CWA, issued a joint statement applauding the legislators for pushing to extend the PSP. “By extending PSP grants, Congress has the power to ensure airline workers will continue to stay on payroll with benefits, prevent mass unemployment in October, and keep aviation workers ready to turn the industry around once this crisis is behind us,” the groups said.

Airlines for America (A4A) has said it is “not actively seeking federal assistance,” although a spokesman said the lobbying group would support a decision by lawmakers to pursue a “simple and clean extension of the PSP grants as long as no additional or extraneous conditions are required.”

Airline executives have voiced support for extending the PSP in recent comments. JetBlue CEO Robin Hayes said on the company’s 2020 second quarter (Q2) earnings call July 28 that an extension of federal support “would be a significant game changer in protecting jobs and giving the industry more time to recover.” American Airlines chairman and CEO Doug Parker said on July 23 during AA’s Q2 earnings call that company management is “proud” of the initiative, “as we believe our entire industry has a shared goal of keeping hard-working frontline team members employed.”

Still, with the state of negotiations surrounded by uncertainty, airline executives are planning under the assumption that no additional aid will be forthcoming. A spokesman for South Florida-based Spirit Airlines confirmed to Aviation Daily on July 29 that the company will potentially let go between 20% and 30% of its workforce on October 1, making it the first ULCC to warn of widescale job losses following the expiration of federal payroll support.

Southwest Airlines, by contrast, has committed to refrain from furloughs and reductions to pay rates and benefits through year end, a goal that will be made easier by the fact that 28% of employees have agreed to either take a short-term or extended leave of absence or voluntarily depart the company. “I can promise you that [furloughs] will be the last thing we do to keep Southwest financially healthy and viable,” Southwest president and CEO Gary Kelly wrote in a July 24 staff memo.

JetBlue’s Hayes, speaking on the company’s Q2 call, said the airline also hopes voluntary measures will be enough to avoid furloughs, but conceded that doing so will become increasingly difficult the longer the downturn stretches on.

“If we take a view of some of the more pessimistic outcomes as to where demand could go, you get to a point where it's hard to bridge that gap without considering furloughs,” Hayes said.