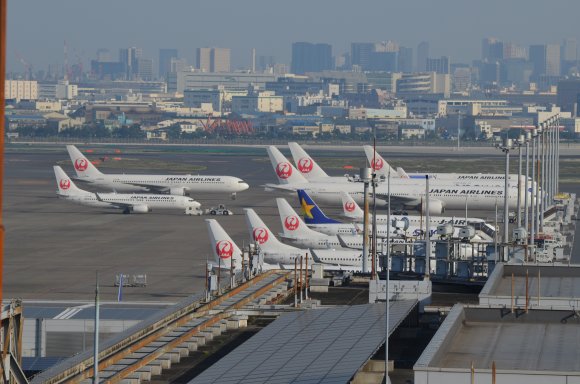 Japan Airlines plans a significant cost-cutting campaign to offset the effects of the COVID-19 crisis, and the carrier signaled this will include aircraft delivery deferrals.

JAL declined to provide its usual financial forecast for its full fiscal year ending March 31, 2021. However, it did outline a potential scenario where international passenger demand returns to about 50% of normal levels by March 2021, and domestic demand recovers to 80-90%.

JAL intends to cut fixed costs by ¥90 billion ($847 million) in the current fiscal year. The airline also plans to reduce its capital expenditure by ¥80 billion. These forecasts coincided with JAL’s announcement of a ¥93.7 billion loss for its fiscal first quarter ending June 30.

The carrier initially set a target of ¥50 billion in capital expenditure cuts for this fiscal year, and subsequently raised the goal to ¥80 billion. The carrier intends to achieve ¥60 billion of the savings total through aircraft delivery deferrals. JAL has a few Airbus A350s scheduled to be delivered this year, although it has not yet made an announcement regarding negotiations with Airbus. JAL also has some Boeing 787s remaining on order, but these have been delayed due to production issues.

The target for reducing fixed costs was previously set at ¥60 billion for the fiscal year, but JAL has now lifted the goal to ¥90 billion. The airline has already identified ¥16.6 billion in cost cuts from areas such as personnel, IT and advertising. The carrier has also reduced the amount earmarked for new route launches, bringing the fixed cost savings so far to ¥29 billion.

JAL has no plans to reduce its current workforce. However, it has suspended its next recruitment intake, which was previously planned for April 2021.

Passenger traffic dropped by 94.2% in the June quarter on an 80.8% capacity decline. Cargo revenue was a rare bright spot, rising by 16.9% year-over-year in the quarter.

The carrier has raised about ¥300 billion in financing since February. It also has an unused credit line of ¥200 billion. At the end of June JAL’s cash-on-hand total was ¥394.3 billion.