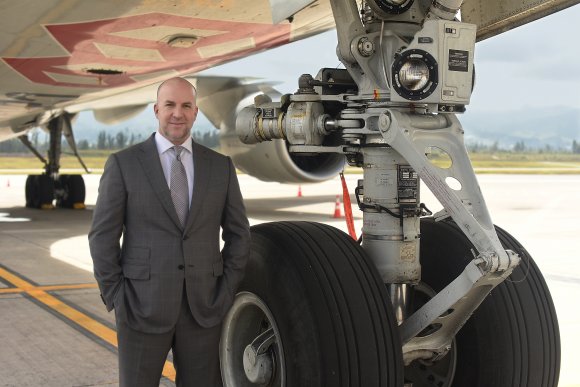 Quito International Airport (UIO) reopened for passenger service on June 1 and has been working since then to rebuild its network. The likes of Aeromexico, American Airlines, Iberia, KLM and United Airlines have already resumed service to Ecuador’s capital, but the liquidation of national carrier Tame in May has left a gap in its network.

Routes spoke to Andrew O’Brian (pictured), president and CEO of airport operator Corporación Quiport, about how UIO has adapted to the COVID-19 crisis and what lessons can be learned.

How has Quito responded to the COVID-19 pandemic?

The response began with the implementation of the airport emergency plan pertaining to health emergencies. Naturally, we had to make some adjustments offhand due to the initial lack of precise information on the characteristics of the virus, its transmission and symptoms.

Initial measures included the deployment of medical squads from the Ecuadorian Ministry of Public Health at the airport to carry out an information surveys to monitor the entry of possible cases of COVID-19 via air transport in order to implement isolation measures and an epidemiological fence. The other objective was to inform passengers about the preventive measures they should take to avoid infection.

After the incidence of the “patient zero” in the country, the national government formed the Emergency Operations Committee (or COE in Spanish) to face the crisis. One of its first decrees was to close the borders for the entry of international travelers to the country and restricted domestic flights.

Despite this, at Quito International we kept operating to serve cargo operations—which were very important in the early stages of the emergency—and to receive and dispatch repatriation flights for foreigners exiting Ecuador or incoming national residents who were stranded away from home.

It was precisely those repatriation flights that allowed us to obtain important information and valuable lessons to prepare the plan for the reopening of commercial operations of passenger flights, including a document that contains all the sanitary protection measures that we have implemented at the airport to protect travelers and the airport community to ensure everyone’s safety.

How has Quito’s network changed since the crisis began?

The restriction on passenger flights established by the authorities at the start of the crisis meant almost a “reset” for our operation. The airlines that flew to Quito before the crisis began to suffer financial problems that are in the public domain, which led to a contraction and a reordering of their destination networks.

In addition, the government established that airlines could only occupy 30% of the frequencies they originally had and only recently, as of Aug. 1, that ceiling was allowed to rise to 50% of the frequencies previously authorized by the General Directorate of Civil Aviation in Ecuador.

Our challenge now is to stimulate passenger demand on open routes and to work with the other airlines that belong to our network so that they can resume operations in Quito in the shortest possible time. This is not an easy task because that decision depends on many factors; for example, that cities such as Bogotá, Lima or Panama open their airports for commercial flights.

How are you working to restore passenger confidence?

It is essential that the passenger knows that all the necessary measures are being taken at the airport and on aircraft to reduce the risk of infection to the minimum. It is important that not only the actions we are taking are effective, but also communication plays a very important role in making sanitary measures visible and explaining them in detail so that passengers understand how we are protecting them.

To do this, we created the communication campaign ‘A new way to travel’ as a strategy to reach the passenger in a fresh way, transmitting security and confidence.

We maintain a very intense communication strategy through our social networks, especially Twitter and Facebook. We have also launched a promotional campaign for our ‘New way to travel’ on billboards and advertising spaces inside the terminal, as well as manage a high-profile presence in mass media, to the point where Quiport has become the benchmark, or the prime source for information on the new measures adopted by the government through the COE and which impact air transport.

What changes have been implemented at the airport?

In the passenger terminal we have implemented a series of changes to maintain the sanitary security of our operation. Corporación Quiport has installed:

In addition, the furniture of the public departure hall was removed to facilitate a mobilization area and the capacity of commercial stores, restaurants, pre-boarding rooms and VIP lounges was reduced.

Have your relationships with airline partners changed? Are carriers looking for greater incentives?

Air transport is an interdependent system. For the entire system to be healthy, all of its components must function properly. Under this premise we work with airlines to understand their needs, but also to explain what our situation is. In our case, we comprehended that the best way was to work together to ensure that the authorities allowed the resumption of commercial passenger flights in the country to begin, generating traffic that would alleviate the financial pressure of airlines and airports.

On the other hand, each airline has its own operational and financial reality and we have sat down with each of them to establish how we can generate solutions that allow the continuity of operations. Our mentality is to work on win-win strategies.

How has the Tame situation affected your planning?

Tame's situation was already very complicated before the present health crisis and precisely this turned into a catalyst that precipitated the closure of the airline. The impact will undoubtedly be important, since Tame had 34% of the domestic market.

Here we also have new opportunities. Avianca, LATAM and even Aeroregional, the other three carriers in the domestic operation, now have the possibility of rearranging the market without the influence of a state actor that competed in other conditions thanks to its weight.

It is very sad for Tame, which was the only Ecuadorian national airline, and for its employees, but the air transport industry is very resilient and we hope that the growth of the other airlines will allow the majority of the professionals who were at Tame to find new roles.

Every crisis carries the potential to create new opportunities. Throughout history the successive crises that humanity has gone through have taught us that. Crises become catalysts for processes of change that were already present but become accelerated.

A very specific case is what we are doing in Quiport regarding the implementation of technological solutions for the operation. For some years we have been working on various solutions of this nature and our schedules were designed for the medium term. There was no urgency and sometimes we depended on the possibilities of homologizing technologies with those of other airport entities, such as government agencies.

The crisis has led us to speed up processes and has pushed others to speed up their developments as well. Part of the new normality in air transport is related to the possibility that we offer the passenger the ability to self-manage airport processes. In today’s world, innovation is a necessity and a priority.

When do you expect traffic to return to 2019 levels?

We believe this will not happen before 2024. The faster the other airports in the region open and the faster we get used to the new reality and the countries eliminate the restrictions on flights, the situation may evolve more favorably.

What have been the main lessons you have learned from the crisis so far?

This crisis has ratified something I have always believed in: that the only constant is change, and therefore, it is important that we be resilient and develop the capacity to reinvent ourselves, as individuals and as companies.

Perhaps more than a lesson, the main discovery has been the level of passion, commitment and professionalism with which everyone in Quiport has assumed the crisis. I was already aware of the high levels of excellence of the team, which always showed that it was prepared to forge ahead in difficult times, but this has undoubtedly been the greatest challenge that we’ve had to face and everyone, without exception, has taken a step up to manage the crisis and emerge stronger from it.