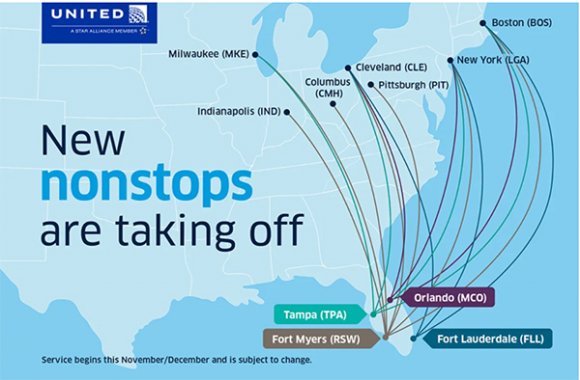 As the outlook for corporate and international travel remains weak, United Airlines is hoping that the coronavirus pandemic will not dampen demand for warm weather leisure destinations in the US this winter.

The Chicago-based carrier is adding up to 28 daily nonstop flights to Florida from November, offering new routes to four airports in the Sunshine State from seven northern US cities. The 17 nonstop seasonal services will bypass the airline’s hubs, instead flying point-to-point.

United said the move forms part of a strategy to “aggressively and opportunistically” manage the impact COVID-19 by reshaping its network to match passenger demand.

“The addition of these new flights represents United’s largest expansion of point-to-point, non-hub flying and reflects our data driven approach to add capacity where customers are telling us they want to go,” VP-domestic network planning Ankit Gupta said.

From Dec. 17, United will further increase service to Florida with flights from Milwaukee (MKE) to RSW and TPA, and from  Columbus (CMH), Indianapolis (IND) and Pittsburgh (PIT) to RSW. Tickets are on sale for flights into early January, which covers the holiday travel season.

The expansion of services to Florida comes despite the state this week recording its highest single-day number of coronavirus deaths, with 276 reported, and the death toll now stands at more than 8,700. Because of the recent spike in cases, United said it intends to adjust capacity and frequencies to Florida depending on demand.

Network-wide, the airline expects to fly 37% of its overall schedule in September as compared to the same period last year, with a 4% increase in capacity compared to what is planned for August 2020.

It plans to resume service on 20 routes in Latin America and the Caribbean, including to popular vacation destinations like Cabo San Lucas and Puerto Vallarta in Mexico and to San Jose and Liberia in Costa Rica.

A new nonstop service between Chicago O’Hare (ORD) and Tel Aviv (TLV) will also begin, alongside the resumption of eight routes in the Atlantic and Pacific, including the return of European service from Houston (IAH) with flights to Amsterdam (AMS) and Frankfurt (FRA).

“We continue to be realistic in our approach to building back our international and domestic schedules by closely monitoring customer demand and flying where people want to go,” United VP-international network and alliances Patrick Quayle said.

He added that a focus for the international resumptions has been to attract VFR passengers and leisure traffic.