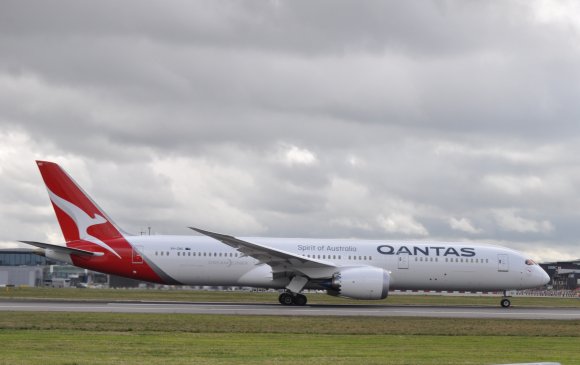 Qantas CEO Alan Joyce said the Australian flag carrier is assuming it will restart international routes with its Boeing 787s in its next fiscal year, which begins July 1, 2021.

International capacity could reach 50% of pre-COVID levels during the 2021/22 fiscal year starting July 1, 2021, he said during the virtual CAPA Australia Pacific Aviation summit. He noted that the carrier does not plan to see substantial international service until July 2021.

Some international service could resume earlier if travel bubbles open up between Australia and certain markets such as New Zealand, Japan, or other Asia-Pacific nations with similar records in controlling the pandemic, Joyce said.

The CEO added that Boeing 787s “will be the right aircraft” for the post-COVID international market. They will allow Qantas to operate a broad network, with a good premium mix, and fly long-haul routes that avoid stopovers.

There will be an even stronger business case for long-hual nonstop routes after the COVID-19 crisis, Joyce said. This would include the Perth (PER)-London (LHR) route Qantas operated before the pandemic, and planned routes such as PER-Paris (CDG) and Sydney (SYD)-Chicago (ORD). The 787 “will allow us to take those opportunities,” he said.

In contrast, Qantas has put its 12 Airbus A380s into long-term storage for at least three years. Joyce said the airline does not foresee enough demand for these aircraft until the 2023-24 fiscal year.

Qantas was set to place a firm order for A350-1000s before the pandemic hit. The plan was to use these aircraft to operate its Project Sunrise ultra-long-haul routes from Australia’s east coast cities to London or New York. The carrier was “literally a couple of weeks” away from confirming this order before it was forced to postpone due to the COVID crisis, Joyce said.

The airline still plans to place this order when it has improved its financial situation and balance sheet, Joyce said.