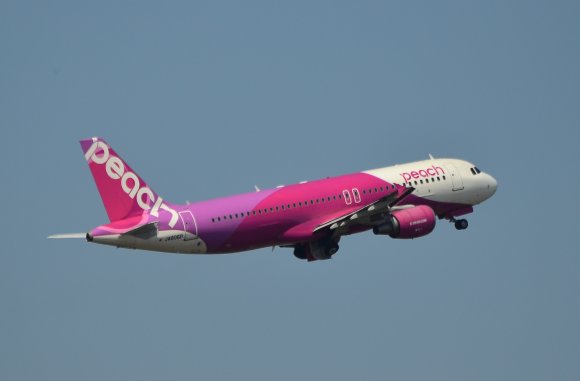 The carrier intends to restart flights on three routes from Japan to Taiwan, which is the carrier's most important international market. Flights to Taipei (TPE) from Osaka (KIX) and Tokyo's Haneda (HND) and Narita (NRT) airports are scheduled to resume Oct. 25, with three weekly flights each.

Peach’s HND-TPE operations were suspended on March 2 because of the coronavirus pandemic, with flights from NRT and KIX to TPE ending on March 20. All of the LCC’s 17 international routes have been suspended since March 20. Prior to the COVID-19 crisis, Peach operated 10 routes between Japan and Taiwan.

While none of Peach’s international flights have been operating, it has been continuing domestic flights. The carrier steadily built up its domestic services after internal travel restrictions were eased in June, and actually exceeded its original plans for the peak August period. Peach was planning to operate 91% of its domestic flights in September, but downgraded the estimate to 62% for the month after a surge in coronavirus cases in Japan.

Demand is likely to remain low on Taiwan-Japan routes due to travel and quarantine restrictions imposed by both countries. However, the Japanese government is aiming to boost international travel by negotiating travel bubbles with other countries and dramatically expanding COVID-19 testing facilities at airports in Tokyo and Osaka.

The major Japanese airlines have also been cautiously resuming some international flights. All Nippon Airways planned to operate 11% of its international schedule in August, 12% in September, and 13% in October. For October, it intends to resume flights to Houston Intercontinental (IAH), and increase frequencies to four other key markets.

Japan Airlines operated 10% of its international flights in August, and planned to fly 12% in September and 14% in October.