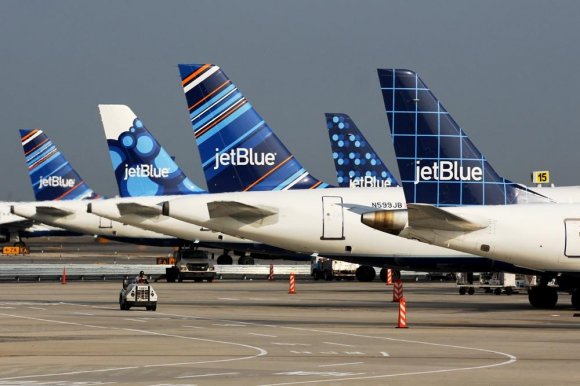 JetBlue Airways is expanding its network with the addition of 24 new routes to warm-weather destinations as part of plans to capture limited travel demand where it still exists.

The new routes amount to substantial expansions from JetBlue’s Los Angeles (LAX) and Newark (EWR) focus cities, while introducing many routes the carrier has never flown before. The traffic is largely directed toward warm-weather, near-international leisure destinations in the Caribbean and Latin America, as well as new transcontinental service flown on Airbus A321s outfitted with JetBlue’s premium Mint cabins. Aside from the Mint service, all the new flights will be operated with A320s.

The additions are an example of how US carriers are seeking opportunities to tweak their route maps in response to shifting demand trends, with most corporate and long-haul demand still moribund, while domestic and near-international leisure and VFR traffic shows comparative resilience.

“This is the latest example of JetBlue’s ability to be nimble and play offense as we quickly adjust to new customer behaviors and booking patterns,” JetBlue revenue chief Scott Laurence said in a statement.

The expansion will see JetBlue grow its footprint at EWR with seven new nonstop routes to the Caribbean, including twice-daily service to Cancun, Mexico (CUN), and daily service to Aruba (AUA) and San Maarten (SXM) featuring premium Mint service on select flights.

From LAX, JetBlue will also add seven new routes, including cross-country service to Charleston, South Carolina (CHS); Raleigh-Durham, North Carolina (RDU); and Richmond, Virginia (RIC); as well as Mint service to Palm Beach, Florida (PBI), and Liberia, Costa Rica (LIR). The moves come after JetBlue announced plans to embark on a major expansion at LAX over the next several years, following a decision to pull the plug on its former Long Beach (LGB) focus city, which it exits in October.

In Florida, JetBlue will add daily service between Tampa (TPA) and CUN and RIC, as well as between Fort Myers (RSW) and RDU. Elsewhere, the airline will add new connections to Latin America from RDU and San Francisco (SFO), as well as transcontinental service between RDU and Las Vegas (LAS).

“This latest series of new routes—even in the current environment—advances our revised network strategy, returns more aircraft to the skies and doubles down on our ability to generate more cash sooner,” Laurence said.

The route additions are the latest proof of JetBlue’s aggressive strategy to forge new markets despite demand being stuck at around 30% of last year’s level as the COVID-19 pandemic and regional travel restrictions persist. In June, the carrier added 30 new domestic routes, largely focused on leisure travel between the New York Area and Florida, as well as some West Coast destinations.

Other airlines are also adjusting their networks to attract more domestic leisure travelers, while business and long-haul international demand each remain down more than 90%, according to Airlines for America. United Airlines, for example, recently added 17 routes from predominantly northern and midwestern cities to Florida, while Southwest Airlines introduced service at Miami and Palm Springs, California.