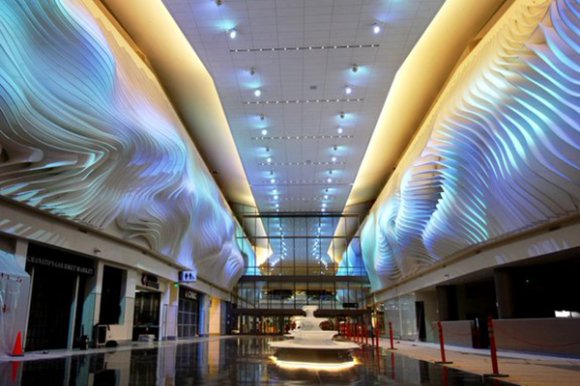 The Salt Lake City (Utah) Department of Airports and Delta Air Lines forged ahead this week with the opening of a revamped Salt Lake City International (SLC) despite the COVID-19 pandemic, touting the first phase of a $4.1 billion project aimed at allowing the airport to comfortably handle 26 million passengers annually.

“The need to build a new SLC airport became apparent as passenger numbers grew and facilities became outdated,” the Salt Lake City Department of Airports said in a statement.

“Prior to the pandemic, SLC recorded more than 26 million passengers in 2019, in an airport that was built for 10 million passengers. The advantages of building an entirely new airport is that the architects were able to design for the future to create a more efficient and more sustainable facility. The new concourses are designed in a parallel configuration—compared to the current pier layout—which will eliminate aircraft bottlenecks and idling, so airlines are able to get their planes to the gate and back in the air quicker.”

Delta operated the first flight out of the new airport on Sept. 15, flying from SLC to its hub Atlanta (ATL). The SkyTeam member is the sole tenant of concourse A, which features 25 gates, six of which are international gates.

On Oct. 27, the second concourse will open with 20 gates to be used by Alaska Airlines, American Airlines, Frontier Airlines, JetBlue Airways, Southwest Airlines and United Airlines.

Phase two of the new SLC will be completed by 2024. The first phase includes a new terminal, new parking garage and new concourses able to accommodate more larger aircraft.

The facility will continue to use the same airfield as the previous SLC, which features four runways: three for airlines and one for general aviation.

Delta is continuing to use the airport as a hub. “As a mid-sized hub connected to global destinations, the new Salt Lake City airport will remain an important part of Delta’s overall network strategy as the airline recovers from the global pandemic,” Delta said in a statement.

“Delta’s involvement in the completion of this airport, coupled with the airline’s extension of its current lease through 2034, stands as a testament to the relationship between Delta, the state of Utah and the airport.”

Delta noted it is investing more than $12 billion in airport projects, including new construction at Los Angeles International Airport (LAX) and New York LaGuardia Airport (LGA) in addition to SLC.