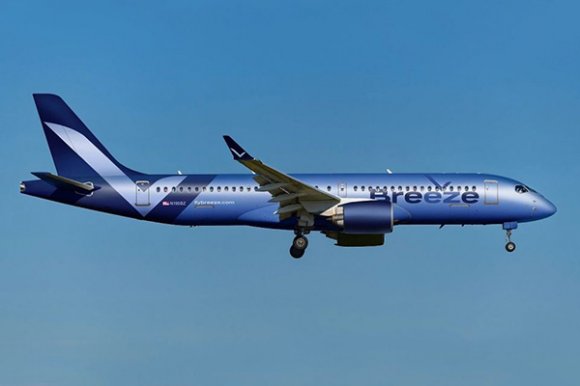 Breeze Airways has pushed back its planned commercial launch date and intends to begin operations with scheduled routes from two US airports, rather than fly charter services as previously planned.

The Salt Lake City-based airline had originally proposed starting sooner with charter flights but said the disruption in college sports caused by COVID-19 had prompted a rethink.

In the subsequent months, Breeze will increase the number of destinations from the two initial airports and open another airport in the south-eastern US.

By July 2021, the airline intends to start flights from another airport in the southeast to points in the mid-Atlantic, northeast and southern plains while increasing the number of destinations from its initial airports.

“The COVID-19 pandemic has challenged the aviation industry like no prior crisis,” the filing to the DOT said.

“The dynamic circumstances have caused Breeze to make adjustments to its plans, including pushing out its anticipated commencement date, launching with scheduled service rather than charter services and postponing the delivery of A220 aircraft until August 2021. Despite these headwinds, Breeze’s experienced, capable team remains undeterred.”

Breeze’s strategy is to bring low-cost, nonstop services to mid-size markets, which it claims have been “abandoned” by other US carriers. The startup believes that by flying smaller aircraft with a lower trip cost, there are “hundreds and hundreds of city pairs that can support a nonstop flight.”

The airline added: “As major airlines retrench their networks in response to decreased travel demand, Breeze sees even more opportunities to serve smaller cities currently reachable, if at all, only through connections and the corresponding increased travel times.”

On Aug. 28, Breeze raised approximately $83 million from equity investors through a series A financing. The company said the cash raised provides it with “more than adequate balance sheet strength” to launch its new operations.

Breeze has agreed to acquire 60 Airbus A220-300 aircraft produced in Mobile, Alabama with the first to arrive in August 2021. The second will arrive in September, the third in November and approximately one per month thereafter beginning in January 2022.

Prior to the A220 deliveries, service will begin with leased Embraer E190/E195 aircraft equipped with 108 or 118 seats respectively. Breeze is currently is in the process of finalizing leases with both Azul and Nordic Aviation Capital. The first delivery from Azul is expected by the end of next month.