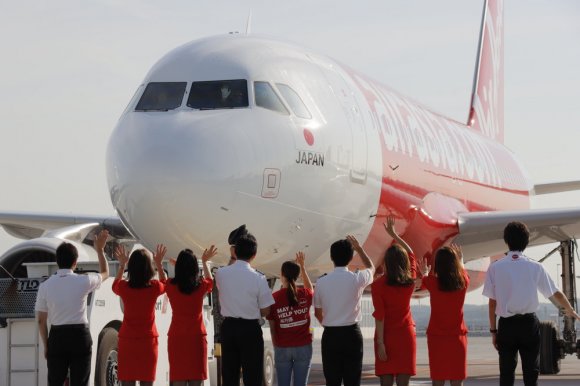 AirAsia Group is ceasing its Japanese joint-venture operations immediately with the Nagoya-based LCC saying the impact of COVID-19 has “weighed heavily” on its ability to continue flying.

In a statement, AirAsia Japan said the coronavirus crisis has left a “significant and sustained adverse economic impact” on businesses and economies around the world and the airline had “not been spared.”

As a result of the lower passenger demand and ongoing travel restrictions, the LCC has taken the decision to ground all aircraft and cease operations effective Oct. 5.

“Despite our unrelenting efforts to sustain operations through successive and wide-ranging cost reduction initiatives, we have concluded that it would be an extremely challenging feat for us to continue operating without any visibility and certainty of a post-pandemic recovery path,” AirAsia Japan COO Jun Aida said.

“This painful decision to cease operations was decided neither in haste nor taken lightly. It was agreed upon after conducting a thorough business review. Further steps to this decision will be made in accordance with the applicable laws and regulations including the Japan Civil Aeronautics Act.”

The cessation only affects the domestic and international flights operated by AirAsia Japan with the DJ code and does not affect other flights into and out of Japan operated by other airlines within the AirAsia Group.

AirAsia Japan was originally founded in 2012 and based at Tokyo Narita (NRT). After AirAsia Group exited that AOC in 2013, the airline became wholly owned by ANA, which later rebranded the carrier as Vanilla Air.

The latest incarnation of the AirAsia Japan brand launched in 2017 from a new base at Nagoya Centrair (NGO). AirAsia Group is the majority owner alongside other Japanese investors, including online retailer Rakuten.

Prior to the COVID-19 pandemic, the LCC operated daily flights from NGO to Sapporo (CTS) and Taiwan Taoyuan (TPE), as well as up to 2X-daily to Sendai (SDJ). After suspending operations for four months because of the virus, service gradually resume on Aug. 1 with flights to CTS and SDJ alongside a previously planned new route to Fukuoka (FUK).

However, as reported on Sept. 17, AirAsia Japan planned to suspend all flights on Oct. 1 until Oct. 24 at the earliest amid lower-than-expected passenger demand. In a statement to Routes, the airline confirmed the move and said it would “continue to monitor the situation.”

Although the proposed suspension was later denied by AirAsia Group CEO Tony Fernandes, he admitted that the future of the airline was under review. The carrier was the smallest unit in the AirAsia Group with just three Airbus A320s and posted a net loss of JPY1 billion ($9.3 million) in the three months leading up to June 30.

According to data provided by OAG Schedules Analyser, AirAsia Japan was also the smallest of seven Japanese LCCs in 2019, offering 620,640 departure seats. Skymark Airlines was the largest, followed by Peach which merged with Vanilla Air during the year.

Despite AirAisa Japan’s decision to cease operations, all routes operated by the carrier from NGO will continue to be well-served. According to OAG, four other carriers serve NGO-FUK, collectively providing almost 20,000 two-way weekly seats.

AirAsia Japan joins a list of carriers that includes Flybe, TAME, SunExpress Deutschland and Compass Airlines to have ceased trading during the COVID-19 pandemic.