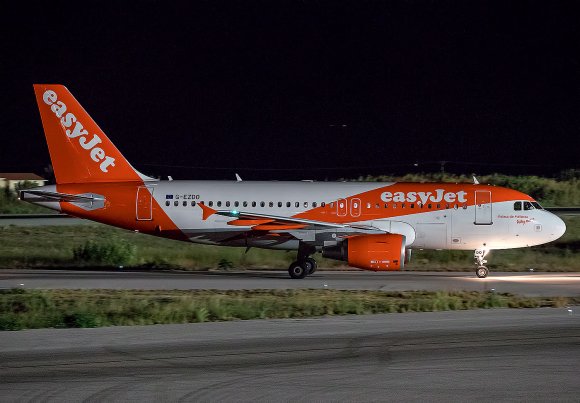 EasyJet expects to fly at just 25% of normal capacity into next year unless travel restrictions are relaxed, the UK airline said Oct. 8 after warning that its first ever annual loss could be as much as £845 million ($1.1 billion).

In a trading update for the financial year to Sept. 30, the carrier said it intends to cover “the majority” of its pre-existing network with reduced frequency over the next three months, taking advantage of the European slot waiver mechanism put in place for this winter.

CEO Johan Lundgren said easyJet has taken a “very prudent and conservative approach” to capacity during the COVID-19 pandemic, which has helped to minimize losses. He added that the LCC has the flexibility to “ramp up capacity quickly” once passenger demand returns.

According to data provided by OAG Schedules Analyser, easyJet is this week (w/c Oct. 5) offering 592,000 departure seats across its network, compared with 2.2 million seats during the same week a year ago. The airline is currently serving about 109 destinations, compared with 145 at this time in 2019.

As part of a restructuring program, easyJet has already closed its bases in London Southend (SEN), London Stansted (STN) and Newcastle (NCL), although STN and NCL continue to be served.

In addition, no flights will operate from the airline’s Venice (VCE) base through March 27 or from its Naples (NAP) base between Nov. 1 and Dec. 17 although both airports will continue to be served from other points in the LCC’s network.

However, the carrier expects the scale and flexibility of its operations will allow it to take advantage of changes in the competitive landscape during the recovery phase. “EasyJet will act quickly to selectively acquire attractive slots made available in locations where the opportunity arises,” the airline said.

Both bases are set to become operational next spring, operating over the summer season through October. Each will be the third easyJet base in each country, with FAO joining Lisbon (LIS) and Porto (OPO) in Portugal and AGP alongside Barcelona (BCN) and Palma de Mallorca (PMI) in Spain.

“Despite the difficult environment that the whole industry is navigating through, this move confirms our commitment to these two popular destinations and will enable us to better serve our customers by optimising our schedule over the summer season as well as making a positive economic contribution to each region,” easyJet group markets director Thomas Haagensen said.

The addition of FAO and AGP means easyJet will operate from 28 bases across its network. Spain and Portugal are key markets, with around 26% of all easyJet passengers touching Spain or Portugal in the last financial year. EasyJet flew more than eight million passengers to and from Portugal last year and 18.5 million to and from Spain.

During the company’s financial year to Sept. 30, overall passenger numbers decreased by 50% to 48 million, in line with a decrease in capacity of 48% to 55 million seats. Load factor for the full year will decrease by 4.3 percentage points to 87.2%.

The business expects to post a headline loss before tax in the range of £815 to £845 million for the 12-month period. The board will not be recommending the payment of a dividend.