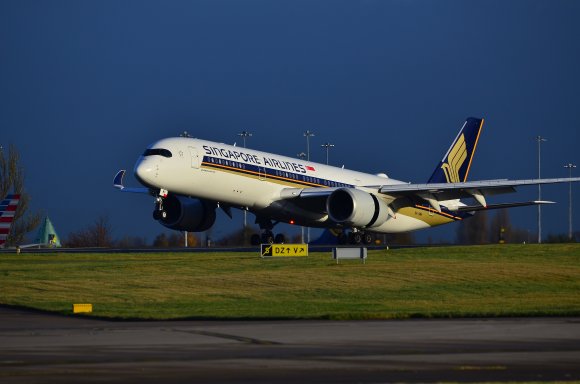 Singapore Airlines (SIA) will resume the world’s longest scheduled nonstop flight between Singapore (SIN) and New York (JFK) from Nov. 9, replacing the SIN-Newark (EWR) route suspended at the start of the COVID-19 pandemic.

The Singaporean flag-carrier said flying to JFK allows it to better accommodate an uptick in cargo demand on the route as well enable passengers to transit through the New York market. The switch from EWR to JFK makes the route even longer. The flight will be the only air cargo link between Singapore and the US northeast.

At Present, Los Angeles (LAX) is SIA’s only US destination.

SIN-JFK service was previously served by SIA using the Airbus A380 on a one-stop basis via Frankfurt (FRA)).

The new nonstop SIN-JFK route will be flown 3X-weekly starting Nov. 9 using a "standard" A350-900 instead of the A350-900 ultra long range (ULR) variant. The standard A350-900 seats 42 passengers in business class, 24 in premium economy and 187 in economy. The ULR has 67 and 94 seats in business class and premium economy, respectively, and had been used specifically for the US market.

“Nonstop ultra-long services are the bedrock of our services to the key US market. We will continue to ramp up existing services and reinstate other points as the demand for both passenger and cargo services return,” SIA executive VP-commercial  Lik Hsin said.

At its height, SIA operated as many as 1,750 weekly one-way seats between New York and Singapore, spilt between JFK and EWR, based on CAPA/OAG data.