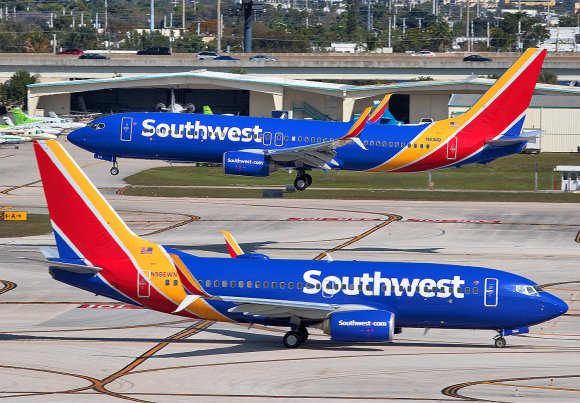 Southwest Airlines' systemwide load factor for October will be 50% at least, up from a previously expected 45% minimum, while November load factors are expected at 50-55%.

“Demand continues to be inconsistent by market, which makes it pretty challenging,” president Tom Nealon told analysts on the company’s third-quarter earnings call. “In the third quarter, we did certainly continue to see strength in areas such as Southern California, Intra-California, Las Vegas, Denver, Phoenix, Texas and Florida. And we're also seeing more signs of life in markets like Chicago, Kansas City and St. Louis as well as others,” including Hawaii, he added.

Travel restrictions continue to hold demand down in several key markets, notably New York, Nealon said.
"October demand and bookings have held up well, compared to September, and that's despite the lack of a big holiday weekend in October,” he said.

"I would say that we are cautiously optimistic about steady, modest improvements in leisure revenue trends going into the holidays,” Nealon said.

The carrier’s continued blocking of middle seats is creating some demand for added flights. About 8% of its 231,000 trips in the quarter were added to accommodate additional demand. While most of the flights covered their costs, Southwest calculates that the blocked middle seats cost it $20 million in revenue in September "from spilled revenue that we just weren't able to accommodate,” Nealon said.
It will eliminate that issue by selling all seats on every flight with a departure date of Dec. 1 or after.

As the carrier continues to navigate the pandemic, it is not pushing aside long-term planning. One of its major decisions is whether it wants to renew its Boeing 737-700 fleet with the latest 150-seat 737 family member, the 737-7, or go away from its all-737 strategy with the Airbus A220. The airline said it needs to have the new aircraft coming in by around 2025, which means it needs to make a decision in the next year or so.

“In our network, there's definitely a need for … a 140, 150-seat airplane versus 175-seat airplane. Today, at the present time, we're mostly focused on the MAX 8, the 175-seat airplane,” said COO Mike Van De Ven. “The A220 and the MAX 7, they are the two players in the [150-seat] marketplace, and both of those airplanes have their strengths and their disadvantages. We've been looking at both airplanes. We'll continue that evaluation.”

Southwest ended the quarter with 734 aircraft, retiring one 737-700 and returning two more to lessors. It plans to remove three more 737-700s this quarter.

New aircraft deliveries remain on hold, as the airline’s entire 251-aircraft backlog consists of grounded 737 MAX family models. The carrier will take no more than 48, and perhaps far fewer, by the end of 2021. It has 34 in storage awaiting FAA approval for the fleet to return to service and another 34 awaiting delivery from Boeing, which stopped delivering but kept producing MAXs after the March 2019 global grounding following two fatal accidents.

"We are in the process of restructuring our order book with Boeing and do not have a revised delivery schedule to share with you today, but we do hope to nail down the specifics soon,” CFO Tammy Romo said.