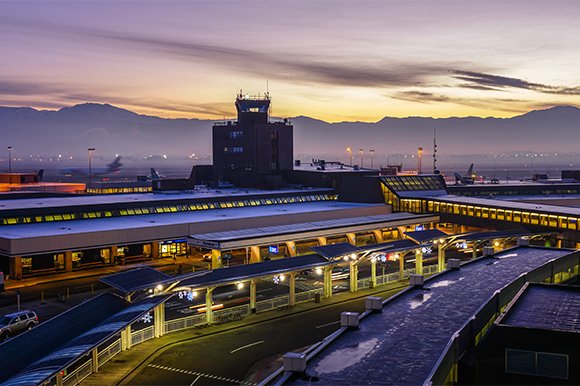 Salt Lake City International Airport (SLC) moved ahead with the opening of the latest portion of its $4.1 billion expansion project, a new concourse that will house 21 gates serving seven airlines.

The Utah airport that serves as a hub for Delta Air Lines, which last month started operations as the sole tenant out of SLC’s new concourse A that features 25 gates, on Oct. 27 opened concourse B, which in addition to a small amount of Delta spillover traffic from concourse A serves Alaska Airlines, American Airlines, Frontier Airlines, JetBlue Airways, Southwest Airlines and United Airlines.

The revamped airport, which uses the same airfield as the previous SLC, has been designed to handle up to 26 million passengers annually; the previous facility was built for 10 million annual passengers, yet handled 26 million in 2019.

“Today is like icing on the cake,” Salt Lake Department of Airports Executive Director Bill Wyatt said of the opening of concourse B. “It’s been six weeks since the successful opening of ‘the new SLC’ and today we welcome all of our airline partners to their new home in concourse B, which completes phase one of the project.”

The airport has the ability to add eight more gates in a second phase of construction and 15 more gates in a third phase. “With phase one of ‘the new SLC’ complete, demolition is underway on the previous airport structure to begin building the next phase,” the airport said in a statement. “Phase two includes the build out of concourse A to the east and construction of the concrete portion of a permanent tunnel to transport passengers between concourses A and B. This is expected to be completed by late 2024.”