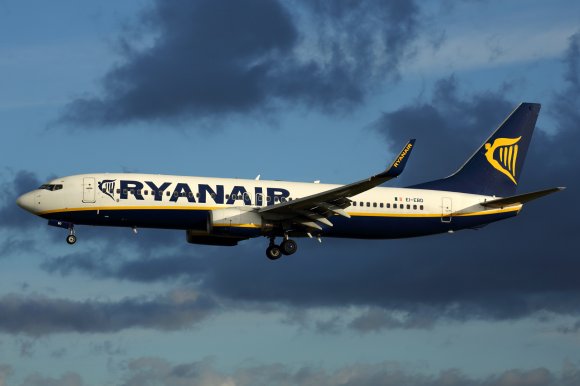 Ryanair is suspending operations from Irish airports with the exception of Dublin (DUB) for four weeks from Nov. 14 due to COVID-19 restrictions in the country.

Flights from Cork (ORK), Shannon (SNN), Ireland West (NOC) and Kerry (KIR) will be cancelled until Dec. 12. The airline blamed “continuous government mismanagement and a complete collapse in travel demand” for the decision.

Ireland last week moved to its highest level of coronavirus restrictions to help curb the spread of the virus. Non-essential shops have been closed and people are advised against all non-essential travel more than 5km (3.1 mi.) from home.

“From Nov. 14 to Dec.12, Ryanair will only operate from Dublin Airport in Ireland, but operations will resume on Dec. 13 ahead of the Christmas season to allow Irish families to reunite,” Ryanair said in a statement.

Earlier this month, the ULCC said it was cutting capacity for the winter season down to around 40% of normal levels and closing bases in ORK and SNN. The airline had previously expected to operate at 60% of 2019 levels between November and March.

Following Ryanair’s decision to suspend commercial flights from NOC, the airport plans to close between Nov. 14 to Dec. 13 and has called on the Irish government to provide “urgent support.”

“This is a further devastating blow for the airport and its staff where passenger numbers this year have plummeted by over 90% with annual passenger numbers now forecasted to decline to less than 150,000 for the full year—the lowest in over 20 years,” NOC said in a statement.

ORK MD Niall MacCarthy described Ryanair’s cancellations as “a further body blow to the Irish aviation industry.” The airport expects passenger numbers during November to be about 9,000, a 95% decrease compared with the same month a year ago.

“It is acknowledged that as an island nation with an open economy we have to learn to co-exist with this virus for quite some time yet. In that regard, we welcome the Irish Government’s adoption of the EU traffic light system from Nov. 8.

“However, a low-cost, scalable, results pre-departure testing regime needs to form the backbone of the return of confidence in safe air travel. The mechanisms and protocols for this are yet to be agreed in Ireland and this is beyond urgent now.”

According to data provided by OAG Schedules Analyser, Ryanair is this week (w/c Oct. 26) operating flights from ORK to Gdansk (GDN), Katowice (KTW), London Stansted (STN) and Malaga (AGP). Manchester (MAN), STN and Wroclaw (WRO) are served from SNN; London Luton (LTN) and STN from KIR; and Liverpool (LPL) and LTN from NOC.