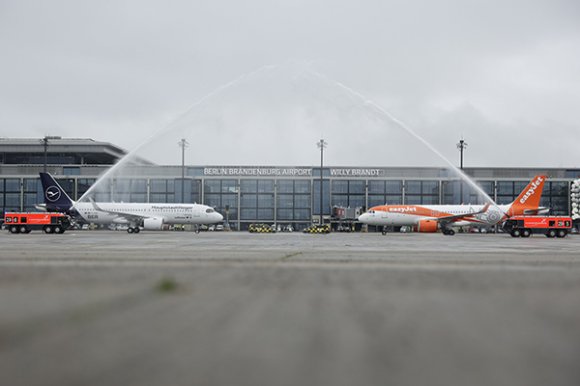 After years of delays and setbacks, Berlin Brandenburg Airport Willy Brandt (BER) welcomed its first scheduled flights on Oct. 31 with a parallel landing from Lufthansa and easyJet.

Then, at 6.45am on Nov. 1, an easyJet aircraft took off for London Gatwick (LGW). During the course of the day, a total of 23 flights departed from the new Terminal 1. About 3,000 passengers passed through T1 and around 5,000 at Terminal 5, the former Schönefeld Airport (SXF).

Schönefeld closed Oct. 25 but much of its infrastructure was incorporated into the new facility as T5.

The next phase of BER’s launch comes on Nov. 4 when the southern runway opens and carriers including Eurowings and Vueling will move to T1. The final move takes place from Nov. 7-8 when airlines still using Tegel (TXL) relocate. These will include Lufthansa with Austrian, Swiss, and Brussels Airlines.

“From now on, the three-letter code BER will represent them on flights all over the world,” CEO Engelbert Lütke Daldrup said. “Thirty years after the reunification of Germany, BER also stands for the end of the fragmentation of air traffic into several locations and for a transformed metropolitan region.”

The significant year-on-year reduction in flights to and from Berlin reflects the drop in air travel demand brought about by the COVID-19 pandemic. Germany is also set to enter a one-month partial lockdown from Nov. 2, with any unnecessary travel being strongly discouraged.

"In a few days, the entire air traffic of the German capital region will be concentrated at the new airport," Daldrup said. "BER offers modern infrastructure in line with international standards and is thus well equipped to receive new services to all continents once the coronavirus crisis is overcome.”

BER covers a total area of 1,470 hectares, the equivalent of around 2,000 football pitches. T1 and T2 are located between the two parallel runways, while T5 is in the northern area. The two runways can be operated independently.

In addition to the northern runway, which has been the main runway used so far, flights will also be operated from the southern runway starting from Nov. 4.

Once fully operational, BER will have capacity to handle more than 40 million passengers per year.