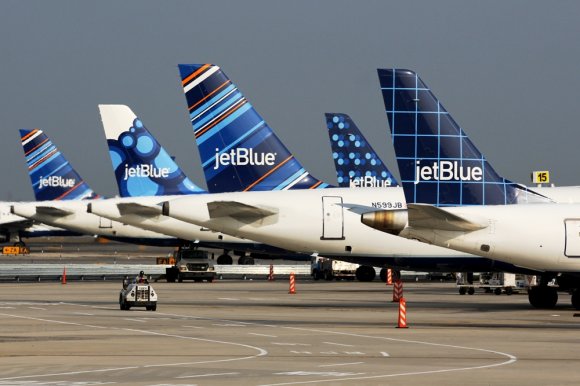 However, JetBlue will not be flying to LHR next summer, after being denied slots at the IATA Level 3 slot-constrained hub. The airline had requested 42 slots, or 21 slot pairs, which would have allowed it to operate 3X-daily round-trips to the US from the airport.

Of the numerous carriers who applied for slots at LHR next year, only one—Shenzhen Airlines—received any, according to a report from Airport Coordination Limited International, which oversees slot coordination at the three UK airports. The slot awards were first reported by Paxex.aero.

At London Gatwick, the UK’s second-busiest airport, JetBlue was awarded 14 of the 28 slots it requested, enough to fly one daily transatlantic round-trip. And at London Stansted, the country’s fourth-busiest airport, the carrier secured all 28 of the slots it sought—enough to operate twice-daily round-trips.

Filings submitted to ACL indicate that JetBlue plans to fly from JFK to LGW, and from BOS to STN.

“We are confident that we have a viable path into more than one London airport,” JetBlue communications manager Phillip Stewart told Aviation Week Network in response to a query. “JetBlue has applied for multiple slots at various London airports and remains committed to launching service in 2021. We continue to review opportunities available to us and will share more details as this process advances.”

JetBlue has been hampered during the COVID-19 pandemic by its geographic concentration in the US Northeast, which has seen a larger year-over-year (YOY) contraction in air traffic than other regions of the country. Data from Airlines for America shows that the states of Massachusetts and New York, home to JetBlue’s two northeastern bases, saw traffic declines of 78% and 79% during October, respectively—worse than every other US state besides Hawaii.

As such, JetBlue has cut more capacity from its fall schedule than competing US-based low-cost and leisure-oriented carriers. During Q3 2020, the carrier slashed domestic capacity by 42% YOY, excluding the 67% load factor caps in place across its fleet. Those Q3 domestic schedule reductions were greater than all other US carriers besides Hawaiian Airlines and United Airlines, according to data from Bloomberg Intelligence analyst George Ferguson.