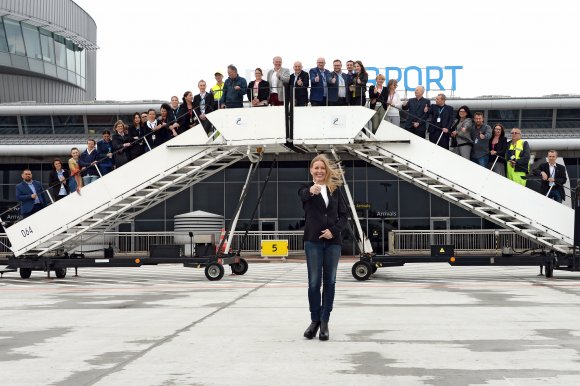 How badly has Łódź been affected by COVID-19?

European aviation economic market data published by ACI, Eurocontrol and IATA shows that there is not much difference between Łódź and most of the other international airports in Europe. We all were deeply hurt by the pandemic and lost almost 70% of our market.

At the start of the year, we were so enthusiastic about the summer 2020 season as we had nine new destinations and expected to serve 20% of passengers more than in the previous year.

However, when the lockdown in Poland was announced by the government, we realized that we will have to postpone our joy for later. The market was frozen and the only one thing we could do was to keep taking care of our cargo and bizjet clients which had still permission to fly. Instead of counting our new passengers we started looking for a new savings and another possibility for growth.

How have conversations with your airline partners progressed in this time?

The COVID-19 pandemic has hit our industry particularly hard and meant the standard way of running our business was no longer relevant. When there is no certainty, no stable legal rules, no sure perspectives for the future, nobody knows what decision must be taken and how to continue the conversations with business partners.

However, such episodes like crises usually stimulates creativity and motivates managers to think out of the box. In the context of “pandemic business silence” we decided not to give up and stay in permanent touch with our airline partners.

Moreover, we came to the decision to get in touch with new ones and we also found plenty of secondary airports similar to ours which deal with comparable problems.

That is why we made a short movie which has been sent to our partners, which we identified as those who might be interested in our offer and new analytic tool for data. Together with Artur Fraj, CCO and commercial director of Łódź Airport Central Poland (LCJ), we tried to encourage our business partners to look into our new commercial program (supporting fast recovery of traffic and connections) and airport catchment analyzer.

The aim of the film was not to let our relations to be frozen in times when personal interactions are so difficult. We wanted to start using online communications tools as quickly as possible in order to be connected and stay in permanent touch.

What incentives/policies have you implemented to drive the recovery?

We decided to implement Local Aviation Recovery Agenda (LARA), which is triple-step plan devoted to carriers stipulating common, equal levels of support. As LCJ is independent from national state capital and influence in terms of decision-making, we were able to present LARA very fast.

The second idea was to use big data. Before COVID-19 we decided to invest in Airport Catchment Analytics Programme delivered by ASM. This tool recognizes inbound and outbound traffic in our catchment area and shows what is the real leakage of our passengers who are identified by postal code. We were the first Polish airport to implement such a recovery program and the only one which uses Airport Catchment Analytics made by ASM. I must admit that there was huge positive response and both recovery measures have been met with great interest from our partners.

How is the regional/national government supporting?

During the COVID-19 outbreak, the European Commission implemented plenty of state aid and public service obligation rules applicable to the air transport sector. That is why national governments have a spectrum of choices and legal possibilities to help their businesses.

Unfortunately, the Polish national government is now focused more on their internal political problems rather than working on the professional recovery strategy. They intensify and dedicate public support more to national companies and leave private ones or those who belongs to regions with very poor or no help.

LCJ was left out of Temporary Framework for State Aid which was adopted by the European Commission on March 19, 2020 to support the economy in the current crisis. The Temporary Framework sets out inter alia the compatibility conditions, which the Commission will apply for the assessment of measures under Article 107(3)(b) TFEU, which allows for state aid to remedy a serious disturbance in the economy of a Member State.

We also didn’t receive anything from National Umbrella Scheme as the Polish government has chosen those rules which enable national authorities to favour Warsaw Chopin ({WAW}}) with 100% state shares.

Which key routes/networks are you focusing on in 2021 and beyond?

Our key routes are divided into two types: routes that are servicing local business and Polish diaspora in foreign countries, and ones to leisure and summer destinations. The biggest Polish diaspora are visible in UK, Ireland and Germany. It’s obvious that the highest demand from the market is from those countries.

Interesting destination are also located in Scandinavia as a lot of Polish people work in the heavy industry sector there. The Ukraine market is also very interesting is for us—nearly 150,000 Ukrainian citizens are living and working in Łódź and nearest surroundings.

Since 2018, we have noticed a huge boom on charter flights. The three main holidays destination are Bulgaria, Turkey and Greece, especially Greek islands. The growing markets in terms of charters are Italy—especially since COVID-19 as the perception of Italy has changed. It is considered a safe country, which has won the fight with the pandemic—and Spain, which presents great weather not only during summer season, but also in the winter.

Łódź is the third-biggest city in Poland, with over 1.1 million inhabitants in the catchment area, so the population is quite big, with various travel expectations. And because Poland is still performing better economically than some other European countries, Łódź inhabitants hunger for travel. To assess the exact destinations, we use big data from the Airport Catchment Analytics tool to forecast traffic and estimate the existing traffic.

Łódź is sometimes called the “last undiscovered city in Europe” and is a good city break destination.

How important is testing to the rebuild of the industry in Europe?

The main aim now for the aviation industry is to give passengers certainty that they can travel. And most probably testing as an alternative to quarantines is the best second solution now.

While many of the countries will re-open their borders to regional and international air travel, passengers are still subject to a mandatory quarantine. These measures effectively stop people from traveling. IATA is calling for the systematic testing of passengers before departure without the need for quarantine on arrival. This will enable governments to safety open borders while balancing social and economic considerations and will better support recovery efforts. But it should be the temporary solution until a vaccine will be in common use and mostly mandatory.

One must also remember that testing means costs, and they could be more expensive than the plane ticket. That is why it is crucial to prepare clear and common rules which indicate who will pay for it. Will it be passengers, airlines, airports, national or local governments? Another question is who will cover the costs of tickets when a passenger tests positive. Will it be covered by the airline, passenger or insurance company? There are still many questions which must be answered but it seems that there is now no better solution than testing.

What else needs to happen to speed the recovery and drive demand?

Since the beginning of the pandemic, the EU Member States have adopted a number of measures to protect their economies from COVID-19. Some of them have had a significant impact on the freedom of movement of people, such as the introduction of internal border controls or travel restrictions within the EU.

The decision of whether to introduce restrictions to free movement to protect public health remains the responsibility of Member States now. However, these restrictions have to comply with the principles of proportionality and non-discrimination as described in the EU acquis communautaire.

That is why common European policy is needed to let people and business travel freely, with no fear that different rules disturb their journey. The policy must be predictable.

Moreover, in terms of fast future recovery, fair state aid rules and measures are needed to keep airports, airlines, tour operators, handling agents and other aviation suppliers alive until they start growing again. This aid should be not only financial help but also focused on regulatory framework, which might be temporary changed just to help to the companies cut costs over the next two to three years.