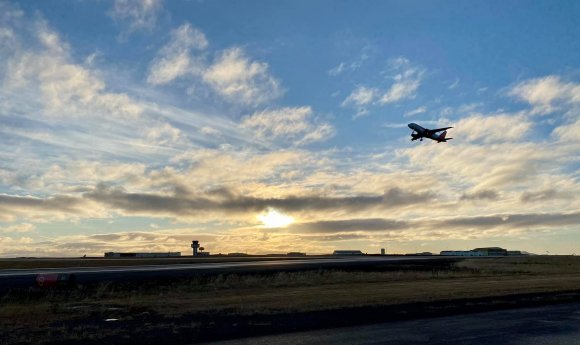 Routes speaks to Grétar Már Garðarsson, director of airline relations and route development at Keflavík International (KEF) as part of Routes Reconnected. He explains that COVID-19 is just the latest issue for KEF to contend with and stresses the importance of reviving the airport’s hub function.

We have been dealing with one crisis after another in recent years. In 2018 we had a record year of almost 10 million passengers, then in late March 2019 WOW air, our second largest carrier, went out of business

By then WOW air had grown dramatically, adding 35 destinations both in Europe and North America. On top of that, Icelandair had issues with the 737 MAX and that aircraft was supposed to replace part of their B757 fleet.

So with WOW gone from the market, Icelandair was unfortunately not in the position to replace some of the traffic.

For 2020, KEF forecasted a decline in passenger traffic of around 8% due to the WOW failure and MAX issues, but because of COVID-19, our passenger numbers are down by 79% and from April to October down by 93%.

In June the Icelandic government put measures on our borders, allowing travelers to be tested upon arrival; immediately we could see a rise in seat capacity and 14 airlines returned to KEF, so the demand is definitely there. But then on Aug. 19 the government added restrictions to our borders because of a rise in infections, resulting in airlines pulling back capacity.

Iceland as a country has been dealing quite well with the pandemic, and the main objective has been to protect the healthcare system. However, those measures don’t help tourism and the traffic at the airport.

Tourism is definitely hurting. There are hotels and restaurants closed and going bankrupt. And for the last few years, tourism has been our main industry, so it’s very hard to deal with.

Which key routes/networks do you need to rebuild?

We will be in competition with most airports in the world once travel starts again, so our main priority is to get as many airlines as we had before and getting the hub for Icelandair back in business.

The link between North America and Europe has been vital for us. Without the hub, Iceland as a country won’t have as many destinations and passengers as before and the growth will be much slower.

What do you expect to be the main factor in driving traffic back?

It’s hard to say now but definitely the positive news regarding vaccines recently; I think that will be key for travel to start. Without that we will see infections rise and fall like we have seen in recent months.

Once the conditions are right, airports have as much responsibility as airlines to resurrect people’s trust to start traveling again.

Iceland will be in a prime position to offer travelers the possibility of being far from big crowds as we have plenty of space and nature to explore. I think people will start to travel to destinations like that.

Obviously Icelandair is your biggest carrier, but how has this affected your other airline partners?

In 2019 we had 26 airlines operating to KEF, which was a good mix of legacy and low-cost airlines.

From the beginning of the pandemic, we have been very much in touch with our airline partners, updating them frequently on how the situation is in Iceland and what measures are in place on our borders.

It’s been difficult not being able to sit in the same room to have these conversations, but the technology has helped—although I don’t expect that the technology will replace face-to-face meetings in the future. I think personal relationships are key in the aviation business.

We’re working hard to keep the airlines in our portfolio, then maybe we can discuss returning, adding destinations, frequencies or larger aircraft over time. But if we lose an airline completely it can be very hard to get them back.

In some cases, we've been working for years to get airlines to fly to KEF so losing that in a heartbeat would be very, very bad.

Have you offered any additional incentives/support to keep those airlines on board?

On March 13 we announced a 100% discount on all airport charges until May 31. At that time, we hoped to stimulate some traffic to Iceland. Shortly after, one country after another closed their borders and airlines started to pull out their capacity.

So in the beginning of May we decided to extend the discount to July 31; that was really welcomed by the airlines and when restrictions on our borders eased in middle of June that helped with the comeback.

Before the pandemic, the airport had just finished extensive work on its incentive program, which took effect on April 1 this year. Those changes will help airlines to grow their traffic again once the conditions to travel are right.

How has the wider stakeholder group (city, tourism board) supported you?

KEF has a good relationship with Promote Iceland, which has the role of promoting and marketing Iceland abroad. Promote Iceland will commence a government-funded branding campaign which will support traffic recovery/development and stimulate demand for all airlines operating to KEF.

The government has allocated ISK1.5bn in marketing Iceland, or around €9.5m, so the government understands the importance of tourism in Iceland.

This is the biggest campaign that the government has ever funded and we’re currently working with Promote Iceland to work out which markets to target first.