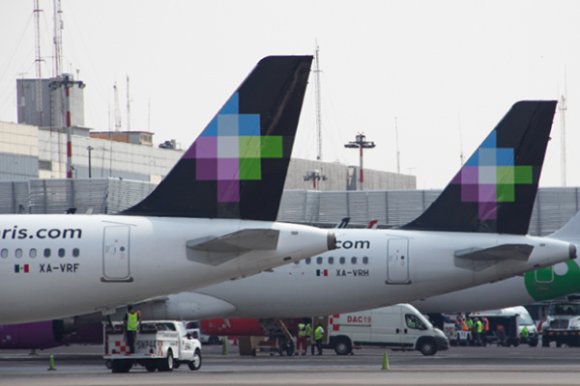 Volaris is eyeing further growth at Mexico City Juarez International (MEX) as the ULCC seeks to exploit opportunities created by the COVID-19 pandemic.

CEO Enrique Beltranena claimed the airline has a “once in a lifetime” chance to expand from Mexico’s main international gateway—an airport where securing slots was notoriously difficult before the coronavirus crisis. He was speaking on Dec. 3 during the Routes Reconnected 2020 conference program and interviewed by Dave Appleby, Routes and ASM director Latin America and the Caribbean.

“When you look at Aeromexico, 84% of their ASMs (available seat miles) were departing from Mexico City, while 78% of Interjet’s ASMs were departing Mexico City,” Beltranena said. “But there’s probably about 80 aircraft that have left Mexico City Airport over the last six to nine months.

“That’s a market that we therefore need to try to serve and take advantage of. In the near term, as the Mexican market continues to recover, we see it as a once in a lifetime opportunity to grow there.”

Since the onset of the pandemic, Aeromexico has shrunk its fleet from 125 aircraft to 101 at the end of the third quarter of 2020, with further reductions planned as the airline navigates its way through a voluntary Chapter 11 restructuring process in the US.

Interjet had 61 Airbus narrowbodies in service as recently as March, but CAPA Fleet Database data shows its Airbus fleet has since dropped to three. Only seven Interjet aircraft are currently in service—all of which are Sukhois.

“There was a de facto grandfather rights system over slots at Mexico City—but that only applies if the operators are current in their payments,” Beltranena said. “That means there is a big opportunity for Volaris to operate in Mexico City.”

According to figures provided by OAG Schedules Analyser, Aeromexico operated 11.4 million departure seats from MEX in 2019, giving it a 36.6% capacity share of all departing seats. Interjet offered 7.4 million for a 23.7% share, while Volaris provided 4.6 million for a 14.6% share.

Volaris transported 1.6 million passengers during November 2020, an increase of 14% versus October. Capacity last month measured in ASMs was 98% compared with November 2019. The ULCC expects to restore 100% of capacity in December.

Beltranena said: “The demand recovery in Mexico is somewhere around 60% of where it should be. So why are we back at 100% capacity in December when demand is only 60%?

“Our load factor in November was about 80%. We’re not putting capacity back for the sake of it—we’re filling the aircraft. There we see a fundamental difference versus some other airlines.”

Beltranena said Volaris’ focus on VFR and leisure routes is driving demand. He also praised the Indigo Partners-backed airline’s marketing efforts, saying its campaigns during the COVID-19 crisis have helped to tempt passengers off busses and on to planes.