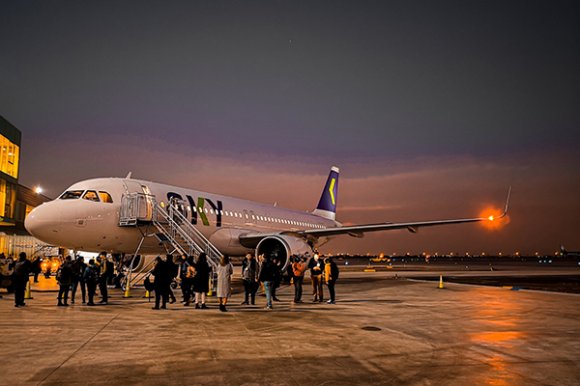 Avianca’s decision to exit the domestic market in Peru and cut much of its international flying from Lima’s Jorge Chávez International (LIM) is opening up huge opportunities for LCCs, according to SKY Airline’s executive president Holger Paulmann.

Speaking during Routes Reconnected as part of a keynote interview with Routes and ASM director Latin America and the Caribbean Dave Appleby, Paulmann said the carrier is seeking to secure slots vacated by Avianca at LIM in order to launch new international services.

“Lima is a very congested airport, but there is an opportunity as Avianca has left many international flights out of the airport—and we’re going after those,” he said.

“We’re going to be adding more routes out of Lima, to the south, even to Brazil, and to the north. Over the next three years, most of the growth from Lima will be international.”

Chile’s SKY received a Peruvian air operator certificate in February 2019 and began domestic operations in April last year. Before the pandemic, the airline offered 10 routes within Peru and had grown to become the second-largest player in the country’s domestic market.

On Dec. 27, SKY will begin its second international service from LIM, in addition to its existing flights to Santiago (SCL). The LCC will connect Peru’s capital with Cancun (CUN) in Mexico, initially with 2X-weekly flights.

“We’re starting with fewer flights than we were originally expecting, but over time we will increase the frequencies,” Paulmann said.

The airline is also hoping to begin flights to the US during the second half of 2021. As reported by Routes, SKY applied in August to the US Department of Transportation (DOT) for a foreign air carrier permit to operate schedule service between Peru and Fort Lauderdale (FLL) and Miami (MIA), as well as a permit to offer charter flights between Peru and the US.

The LCC had hoped to open the services during the first half of 2021 using Airbus A320neo aircraft.

“There has been some delay in the routes we are planning. The process of getting the approvals has been slower because of the inability to be able to travel and meet directly with the authorities,” Paulmann said.

“But we’ve already got the approval from the DOT and we’re currently working on FAA and TSA approval, which we hope to get solved during the coming days. Our plan is to start flying to the US in the second half of next year.”

Before the onset of the virus, seven airlines operated flights between Peru and the US, with LATAM Airlines Group accounting for 44% of all seat capacity between the countries.

Paulmann believes SKY will be able to stimulate demand using lower fares: “There’s going to be a new market that is going to be able to fly to the US that weren’t flying before because our fares will be extremely competitive.”

In Peru’s domestic market, Paulmann said SKY is currently operating about 60% of its pre-pandemic seat capacity, increasing to 80% during the first quarter of 2021.

However, low-cost competition is set to intensify next year when rival JetSMART enters the market. The airline hopes to begin domestic flights in Peru during the first half of 2021, with CEO Estuardo Ortiz saying the closure of Avianca’s Peruvian subsidiary played a part in the decision-making.

Avianca offered almost 2.3 million departure seats in Peru during 2019, more than 700,000 of which were on domestic routes.