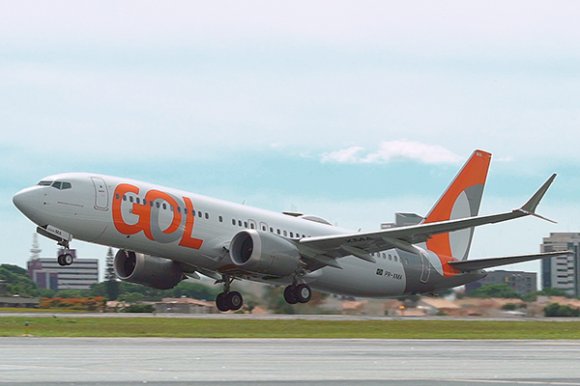 Brazilian LCC GOL is on track to be the first airline in the world to re-introduce Boeing 737 MAX-family aircraft on revenue routes on Dec. 9, part of the airline’s plan to add more cost-friendly capacity for its upcoming peak demand season.

Each flight will be between its Sao Paulo hub (GRU) and a domestic station. A Routes analysis of loaded airline schedules showed GOL had 16 737-8 departures planned for Dec. 9, but an airline spokesperson cautioned that specific aircraft assignments could change.

By the end of December, GOL plans to have all seven of its 737-8 aircraft cleared to fly.

“We are pleased about the return of the Boeing 737 MAX to our network,” said CEO Paulo Kakinoff. “We are grateful to the authorities who took part in the validation stages, especially [Brazil’s] ANAC, which played a leading role in the certification, alongside other international regulators, thanks to its renowned competence and technical skills. We reiterate our trust in Boeing, our exclusive partner since GOL’s inception in 2001.”

GOL, an all-737 operator, said it has put 140 pilots through the new, required 737 MAX family training developed by Boeing and approved by regulators.

“Over the past 20 months, we have watched the most comprehensive safety review in the history of commercial aviation unfold, bringing together regulatory agencies and airlines from around the world to monitor and contribute to the upgrades in aircraft systems and pilot training,” said Celso Ferrer, VP of Operations and a qualified 737 MAX pilot. “Consequently, following the new certification of the Boeing 737 MAX by the FAA and ANAC we are fully confident in the MAX’s return to service.”

GOL used social media to push out news of a Dec. 3 fight between GRU and the airline’s GOL Aerotech maintenance facility in Belo Horizonte, where its 737-8s had been in storage, carrying airline personnel and family members. “It was the time to thank and honor our entire team, responsible for the beautiful work [in] preservation and un-preservation of this aircraft,” a Facebook post said.

The airline has 96 more 737 MAX-family aircraft on order. ANAC cleared the aircraft’s return on Nov. 25, pending GOL completing required software updates and pilot training that Boeing developed during the grounding.

“We train our pilots and conduct technical flights for the return of MAX aircraft, and we are confident that they are among the safest and most efficient aircraft in the world,” Kakinoff said in a Dec. 7 investor update. “The MAX is an important reinforcement of our fleet for the high season, allowing us to manage our air network more effectively, while also capturing benefits of its 15% fuel efficiency over the 737NG, and we fly longer distances.”

GOL’s December schedule averages about 480 flights per day, peaking at 600 per day—or about 80% of December 2019’s levels, the airline said. The carrier plans to operate 99 aircraft in its network.

Gol ended the 2020 third quarter (Q3) with a fleet of 129 aircraft, and its average operating fleet during that time period was 63. The airline plans to return two 737NGS to lessors this month—part of a pre-COVID-19 plan to modernize the fleet that included returning 14 737NGs in 2020. Demand trends could drive additional changes, however. The airline has 1-to-2 737NG lease expirations per month for the next two years, providing flexibility to match capacity with demand.

“We have the ability to downsize further,” CFO Richard Lark said in November. “We could downsize by another 40 aircraft over the next couple of years if we wanted to, just organically, naturally, or those could be replaced with MAX aircraft.”