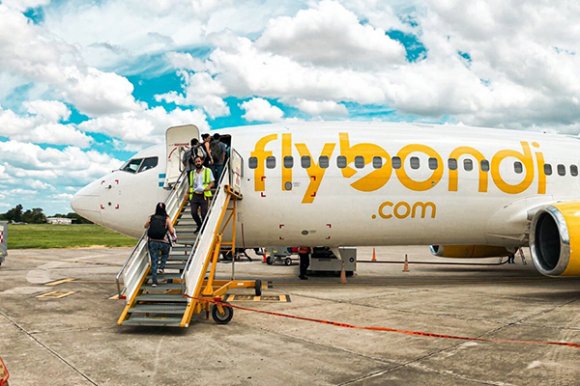 Flybondi has resumed domestic flights in Argentina after backtracking on a decision not to transfer Buenos Aires operations to Ministro Pistarini International (EZE) while El Palomar (EPA) remains closed.

The ULCC has started 12 routes from the capital’s largest airport, connecting the city with Puerto Iguazú, San Carlos de Bariloche and Tucumán among others. The services are the airline’s first since April when the country’s aviation industry shut down to control the spread of COVID-19.

Prior to the pandemic, flybondi’s Buenos Aires hub was at EPA, a commercial and military airport located to the west of the city. However, the Argentinian government has so far prevented EPA from reopening, citing health and safety issues.

EPA was previously used for military purposed before flybondi and rival JetSMART set up home there in 2018. The two carriers collectively offered more than 800,000 departure seats from the base in 2019 as Argentina began to embrace low-cost flying.

While JetSMART last month agreed to shift operations to EZE, flybondi refused. The airline published a statement entitled ‘El Palomar or nothing,’ arguing that flying from EZE was “not a commercial option.” The carrier said the decision not to reopen EPA showed a “total absence of planning and coordination.”

However, after flybondi’s request to resume operations from EPA was again refused, the airline applied to the National Civil Aviation Administration to temporarily shift flights to EZE from Dec. 12.

“We are happy to restart our flights in Argentina after nine months without operation,” flybondi’s commercial director and acting CEO Mauricio Sana said.

“Despite these difficulties, from now on at flybondi we are beginning a stage of recovery of supply and of the fleet. We are convinced that we have to continue connecting Argentines through the lowest rates in the market.”

“The 542 people who make up the flybondi team are ready to once again contribute to key aspects of our country, such as the reactivation of regional economies, employment and tourism,” Sana said.

Argentina’s aviation industry has endured some of the toughest COVID-19 travel restrictions in the world. The country banned all air travel, apart from repatriation flights, until October.