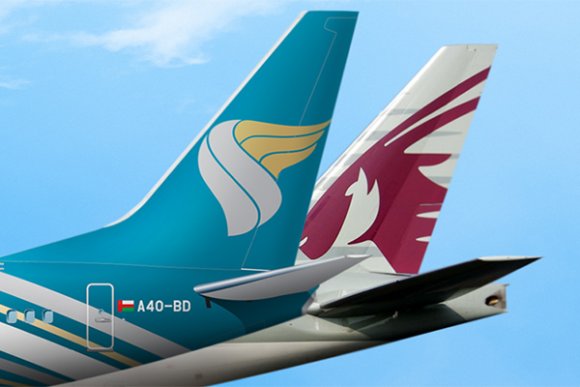 Qatar Airways and Oman Air have signed an expanded codeshare agreement as part of a first step in further strengthening strategic cooperation between the two airlines that first began in 2000.

The deal increases the number of destinations available to Oman Air passengers from three to 65 on Qatar Airways’ network across Africa, the Americas, Asia Pacific, Europe, India, and the Middle East.

Qatar Airways customers will also benefit from additional connectivity, with the ability to book flights to six more destinations across Africa and Asia that are part of Oman Air’s network.

“Now more than ever, it is important to strengthen strategic partnerships across the industry to optimize our operations and provide seamless connectivity to hundreds of destinations across the globe for our passengers,” Qatar Airways CEO Akbar Al Baker said.

The two airlines added that they plan to explore a number of other “joint commercial and operational initiatives” to further develop their partnership.

Qatar Airways is also expanding its codeshare cooperation with LATAM Airlines Brasil. It is hoped the new agreement will further strengthen the two airlines’ strategic partnership, which was first initiated in 2016 and recently expanded in June 2019.

The larger deal will allow Qatar Airways passengers to book travel on 45 additional LATAM Airlines Brasil flights and to access more than 40 domestic and international destinations on the South American carrier’s network.

The codeshare expansions come as Qatar Airways plans to restore its network to 129 destinations by the end of March 2021. The oneworld alliance member operated a low of 33 destinations in May 2020, but service had increased to 110 by December.

Al Baker said: “We expect the global travel and tourism industry to continue to gradually recover. Developments to roll out a vaccine worldwide look promising, giving us greater confidence particularly as we look to the second half of 2021.”

Additionally, Qatar Airways has confirmed plans to bring forward the launch of its new route to Seattle (SEA). The start date for 4X-weekly service moves from March 15 to Jan. 29.

SEA is the seventh new destination added by Qatar Airways since the start of the COVID-19 pandemic. The launch of the route will increase the carrier’s US network to 66 weekly flights to 11 destinations.

The planned launch of the 11,904 km (7,397 mi.) DOH-SEA route coincides with Alaska Airlines’ entry into oneworld on March 31. Talks are already underway between Qatar Airways and Alaska Airlines about developing a codeshare agreement and deepening commercial ties. The two airlines began a frequent flyer partnership in December.

Qatar Airways’ DOH-SEA route will operate on Monday, Tuesday, Wednesday and Friday. Service from DOH departs at 8am, arriving at 12.20pm. Flights from SEA depart at 5.05pm, arriving in DOH at 5.15pm +1.