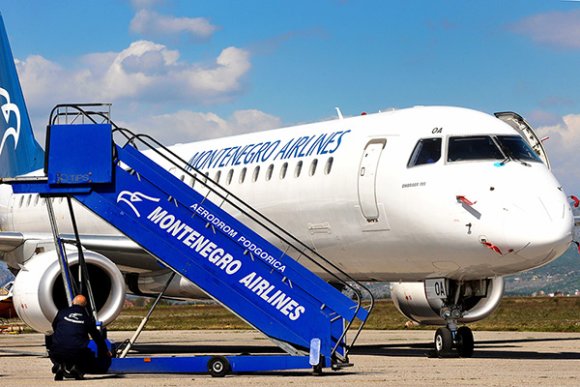 In a message to passengers on its website, the Balkan airline blamed a “radical decision” by the government of Montenegro for grounding the 26-year-old carrier.

The government’s lack of support created a “level of risk which Montenegro Airlines cannot accept,” the airline said, leading it to “completely suspend” all flights as of Dec. 26, 2020.

The state-owned carrier operated a fleet of four aircraft—three Embraer 195s and one Fokker 100—to around 20 destinations, including London (LHR) and Moscow (DME). A codeshare agreement with Air Serbia saw Montenegro Airlines offer customers service to New York (JFK) via Belgrade (BEG).

The current Montenegro government, which has a more fiscally conservative agenda than its predecessors, said the indebted airline suffered from too many “shortcomings” and was no longer worth backing.

The airline said the government’s decision was so abrupt that it was unable to re-accommodate stranded passengers on other airlines. It also said it has no money to refund passengers for unused flight tickets.

“We fully understand the dissatisfaction and negative reactions regarding the current situation,” the airline stated, acknowledging: “We betrayed your trust. The company understands and sympathizes with all the passengers to whom this has caused enormous inconvenience and damage.”

Since the demise of Montenegro Airlines, the country's government has established a new national carrier named ToMontenegro. The company has been founded with a €30 million ($37 million) start-up investment.

Finance minister Milojko Spajić said the name and branding of the airline is subject to change. However, he expects the new carrier to employ many former Montenegro Airlines staff and take over many of its routes.

Data provided by OAG Schedules Analyser shows that Montenegro Airlines offered 10 routes from TGD during 2020 and a further seven from TIV.