Saudi Arabia, Bahrain, Egypt and the United Arab Emirates have agreed to restore ties with Qatar, ending a blockade that has been in place for more than three years.

He said that Saudi Arabia—alongside Bahrain, Egypt and the UAE—had reopened its airspace to Qatar, as well as land and sea borders. Although it remains unclear what the timeline will be, the agreement will have big ramifications for airlines in the region and Qatar Airways in particular.

What was the blockade?

The blockade was imposed in June 2017 when the four countries accused Qatar of supporting terrorism and destabilizing the region—an accusation vehemently rejected by Qatar.

The Saudi-led coalition presented Qatar with 13 demands as conditions for ending the embargo, including reducing diplomatic relations with Iran and closing news organization Al-Jazeera. However, Qatar refused to comply, plunging the region into crisis.

The decision left Kuwait and Oman as the only GCC members with ties to Qatar.

How did this affect Qatar Airways’ network?

As part of the blockade, Bahrain, Egypt, Saudi Arabia and the UAE restricted airspace for all Qatari-registered aircraft. This had major consequences for Qatar Airways, which was forced to drop 18 destinations in from its network (shown below). 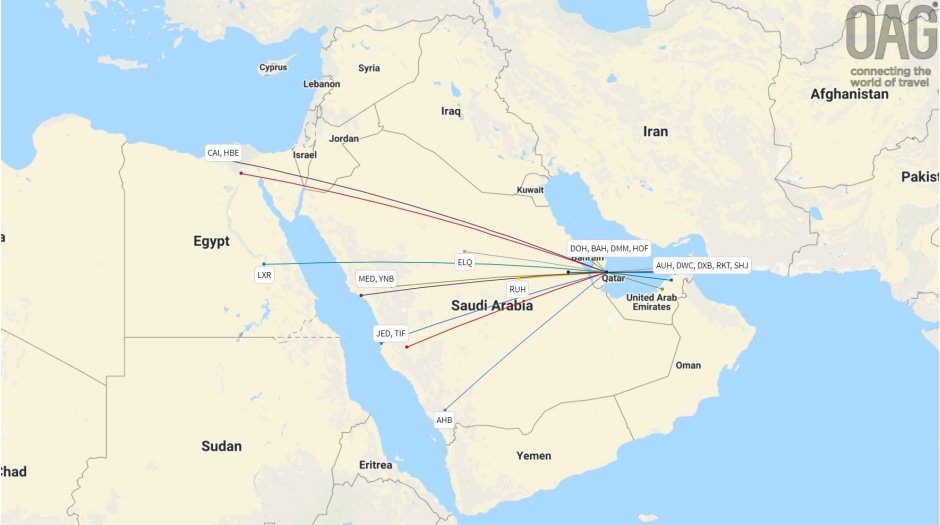 Avoiding the nations’ airspace also led to longer flight times due to the detours needed, as well as higher fuel burn. Some routes, such as Doha (DOH) to Djibouti (JIB), saw flight times extended by an hour or more.

Prior to the blockade, OAG Schedules Analyser data shows that the UAE was Qatar Airways’ biggest country market by weekly seat capacity, accounting for about 7.3% of all departure seats from DOH. Saudi Arabia was the second largest, with a capacity share of around 6.8%, ahead of India (4.7%), the US (4.6%) and the UK (4.5%).

The UAE was also the carrier’s largest market by weekly flight frequencies. About 8.8% of all departing flights from DOH were bound for destinations in the country, with Dubai International (DXB) the busiest route. Saudi Arabia was again the second largest in terms of frequencies, accounting for 6.6% of departures.

In total, Bahrain, Egypt, Saudi Arabia and the UAE made up approximately 17.5% of Qatar Airways’ weekly capacity from DOH and accounted for in excess of 19% of all flight departures.

Although the blockade affected other airlines in the Gulf, Qatar Airways had a larger presence in the four Arab nations than carriers from those countries had in Qatar.

How did Qatar Airways respond?

The airline suffered a near-9% decline in passenger numbers during the year to March 31, 2018, with the blockade having a significant effect on traffic flows through DOH. However, 24 new routes were established, helping to offset the impact of the 18 destinations that were removed.

In July 2020, the carrier launched four international investment arbitrations against the four countries, seeking at least $5 billion from the nations as compensation for their “unlawful” actions. Speaking at the time, CEO Akbar Al Baker said the blockade was “a clear breach of civil aviation conventions.”

“The blockading states must be held accountable for their illegal actions in the aviation sector, which includes a failure to comply with their obligations under bilateral agreements, multilateral agreements and international law,” he said.

Although some reports have suggested that the airspace restrictions have been dropped effective immediately, Qatar Airways’ flightpaths have so far remained unchanged. A spokesperson said that the carrier is waiting for official announcements from the governments on what is actually changing for air traffic.

However, the thawing of diplomatic relations paves the way for the restoration of direct air services between Qatar and Saudi Arabia, Bahrain, Egypt and the UAE, as well as shorter flight times from DOH to destinations in Africa, Europe and North America. That would be a boost for Qatar as it gets ready to take center stage next year as the host of the 2022 FIFA World Cup.