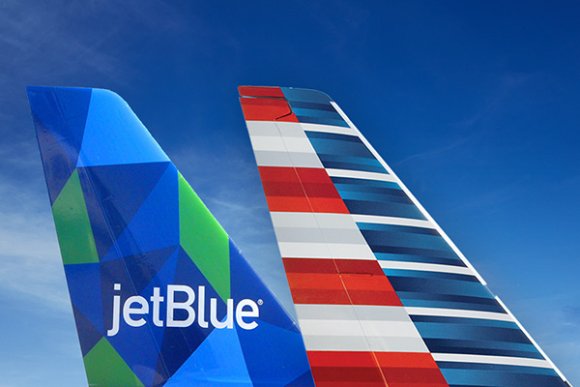 American Airlines and JetBlue Airways said they have reached an agreement with the US Transportation Department (DOT) that will allow them to move forward with their northeast US-focused partnership.

First announced in July 2020, American and JetBlue agreed to reciprocal codeshare flights on more than 60 routes operated by American and 130 by JetBlue. Members of the carriers’ loyalty programs will have the ability to earn and/or redeem points or miles on either carrier as part of the arrangement.

Passengers will be offered “seamless connections” on routes covered by the deal when switching between American and JetBlue, the airlines said. The agreement allows both carriers to expand their presence at Boston (BOS) and in the greater New York City area.

DOT had been reviewing the proposed partnership for the last six months for possible antitrust violations. According to American and JetBlue, DOT will terminate its review “in exchange for a series of commitments to ensure the alliance delivers consumers benefits without harming competition.”

The airlines added: “These include growth commitments to ensure capacity expansion, slot divestitures at [New York] JFK and at Washington Reagan National Airport (DCA), and antitrust compliance measures. Beyond today’s agreement with the DOT, the carriers will also be refraining from certain kinds of coordination in city pair markets where they are substantial competitors to each other and there is little service from other airlines.”

The airlines cited “network alignment in the [US] northeast” as a key reason for the cooperation pact. The deal will “accelerate the replacement of small regional jets with larger aircraft, while greatly expanding the connectivity between each carrier’s network in the northeast,” the airlines stated.

“American will upgauge aircraft and by the end of 2021 will operate all service out of New York with [aircraft that feature a domestic] first class [section]. Starting in the first half of 2021, JetBlue and American schedules [at New York area airports and BOS] will begin to be aligned to give customers new flight options, with improved schedules, better connections, competitive fares and access to more domestic and international destinations,” the carriers said.

JetBlue said it plans to “significantly expand” service at New York LaGuardia Airport (LGA), as well as further expand at other New York-area airports and at BOS.

“The alliance will also allow JetBlue to reactivate aircraft that would otherwise sit idle,” American and JetBlue stated.

As previously announced, American is introducing new service from JFK to Tel Aviv (TLV) and Athens (ATH). “American’s loyal customers in New York will be introduced to their first long-haul international service in more than four years, with even more new routes on the way,” American and JetBlue said.