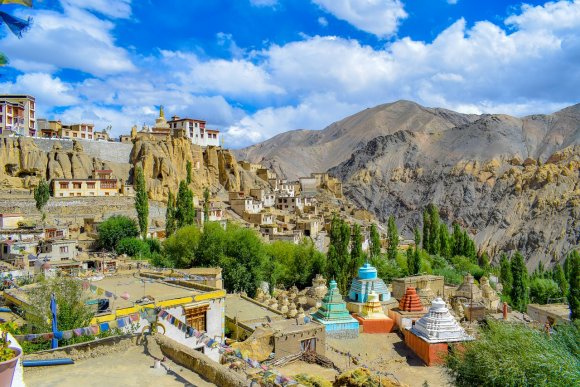 Indian ULCC IndiGo is further growing its domestic network with the addition of Leh, the capital of the Ladakh region located some 11,500 ft. above sea level. The carrier will operate a daily service between Delhi (DEL) and Leh’s Kushok Bakula Rimpochee Airport (IXL) from Feb. 22.

IXL will become the 63rd domestic destination to be served by IndiGo and is one of seven being added to the airline’s network during the coming months. The carrier plans to begin flying to Darbhanga in February, followed by Kurnool and Agra in March, Bareilly and Durgapur in April and Rajkot in May.

“We are pleased to begin expansion of our domestic network beyond the pre-COVID levels,” IndiGo chief strategy and revenue officer Sanjay Kumar said. “We are working towards enhancing regional connectivity, which will not only increase access but also promote domestic trade and tourism in the country.”

According to OAG Schedules Analyser, IngiGo will compete with four other carriers on the DEL-IXL sector. During w/c Jan. 18, 2021, Air India is operating the route 13X-weekly, Go Air 9X-weekly, SpiceJet 7X-weekly, and Vistara 2X-weekly. In total there are 9,842 two-way weekly seats between the destinations. This compares with 7,614 during the same week a year ago.

As reported by Routes earlier this week, SpiceJet is also planning to increase frequencies between DEL and IXL to 2X-daily from Jan. 27. The addition of a second daily flight will add a further 2,646 weekly seats on the route.

The town of Leh stands at a crossroads between Tibet, Kashmir and Kashgar. It is known for its mountainous landscapes, festivals and Buddhist monasteries. O&D traffic between Delhi and Leh totaled more than 530,000 two-way passengers during 2019, Sabre Market Intelligence data shows. This was a slight decrease of 1.8% on the previous 12 months.