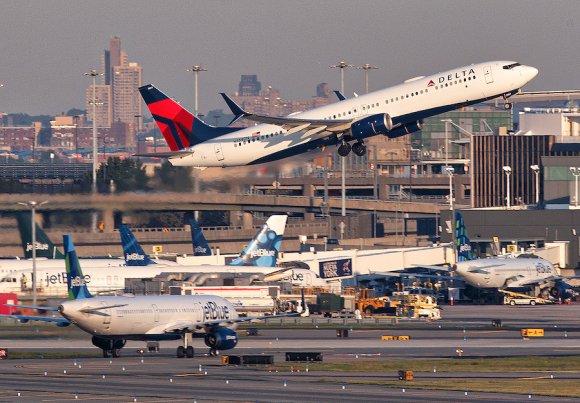 From JFK, the airline will offer a daily service to Martha’s Vineyard (MVY) and Nantucket (ACK), with each route operating from May 28 to Sept. 6. Delta previously operated both routes seasonally from JFK until Sept. 2017, as well as serving the two Massachusetts destinations from LGA.

In summer 2019, Delta offered up to 5X-weekly flights on LGA-MVY and LGA-ACK and up to 3X-weekly on each in summer 2020. However, neither route is scheduled from LGA this summer, instead operating from JFK with increased frequencies.

From LGA, Delta is preparing to ramp up service on routes to Hilton Head Island (HHH) and Myrtle Beach (MYR) in South Carolina, as well as to Key West International (EYW) in Florida.

LGA-HHH was served 1X-weekly in June, July and August 2019 and suspended in 2020. However, Delta plans to operate the route up to 12X-weekly between March 2 and Sept. 6.

LGA-MYR was also operated for a limited time in 2019 with two flights per week, but will return on March 4 through Sept. 6, initially 5X-weekly before going daily in April. Finally, Delta plans to increase frequencies on LGA-EYW from daily to 2X-daily at the start of the summer season.

Leisure markets are currently the best performers in Delta’s network, and the airline is “biasing restoring capacity to leisure markets,” president Glen Hauenstein said earlier this month. As a result, one-third of Delta’s domestic capacity is currently deployed into leisure destinations, he explained.

Delta has forecast for a return to profitability later in 2021 once market conditions start to improve through widespread vaccine distribution.

“As the year progresses, we expect demand will start to accelerate as vaccinations become more widespread and the virus is in a contained state and customers gain greater confidence to make future travel commitments,” Delta CEO Ed Bastian said in a fourth quarter earnings call.