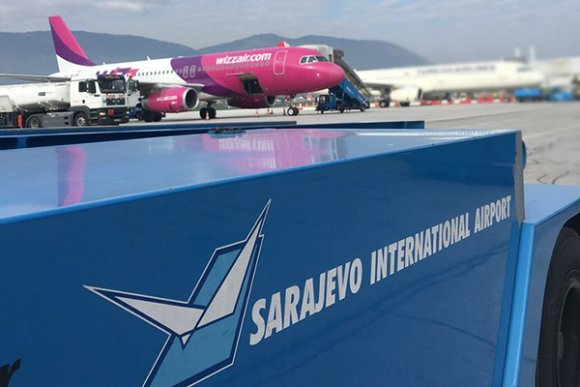 Wizz Air is to establish a base in Sarajevo (SJJ) and launch nine new routes, all of which are currently unserved from Bosnia and Herzegovina's capital.

One Airbus A320 aircraft will be stationed at SJJ from May 20, with the airport becoming the 41st base in the airline’s network. The ULCC is already the largest carrier in the country’s market by capacity but has mainly focused its operations in Tuzla (TZL).

“After eight years of successful operations to Bosnia and Herzegovina, I am delighted to announce our second Bosnian base in Sarajevo, as we see the potential and the demand for low cost travel in the country,” Wizz senior corporate communications manager Andras Rado said.

Wizz began flying to Bosnia and Herzegovina in May 2013 with service from TZL to Malmö (MMX) in Sweden. The airline’s first—and currently only—route from SJJ began in April 2017, connecting the city with Budapest (BUD).

SJJ director of air traffic and air service Nermin Zijadić said tourism increased following the launch of the BUD route—and the addition of nine new services will provide a “very significant” lift for the city’s economy.

Flights to CPH, DTM and MLH will be served 3X-weekly, while the other six destinations will receive 2X-weekly flights. According to data provided by OAG Schedules Analyser, Wizz will face no direct competition on any of the nine routes being launched.

Sabre Market Intelligence data shows that out of the nine destinations, Sarajevo-London was the largest O&D market with 15,800 two-way passengers in 2019. In the absence of nonstop service all traffic was indirect, with Vienna (VIE) the biggest one-stop market.

The expansion from SJJ comes as Wizz is closing one of its two new Norwegian bases. The airline opened bases in Oslo (OSL) Trondheim (TRD) late last year as part of a strategy to capture share in the country’s domestic market. However, the base at TRD will shut, with flight crews and aircraft to run from OSL.

“Wizz Air confirms the consolidation of its Norwegian operations to Oslo base without suspending recently announced routes," a statement released by Wizz said.

"Wizz reacted to the current domestic and international situation by consolidating its Norwegian domestic operations and moving its Trondheim based crew and aircraft to Oslo Gardermoen. The flights which were previously operated by the crew and aircraft based in Trondheim will be operated from the Oslo base.

"These changes have no effect on the routes, the capacity or the number of weekly departures, however secure that Wizz Air can keep on offering low fares paired with a great customer experience on its modern and environmentally conscious fleet.”